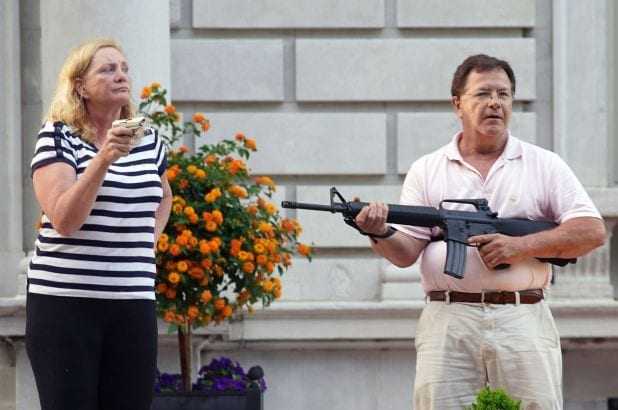 Malcolm X once observed, “I don’t even call it violence when it’s in self-defense; I call it intelligence.”

A St. Louis couple, Mark and Patricia McCloskey, who chose to arm themselves in defense of a mob who broke on to their property and allegedly threatened their lives insist they were acting justifiably and…yes…intelligently.

They were also acting lawfully –as long as they were in fear and reasonably believed that the force of weapons they displayed were necessary to defend themselves from an imminent threat of harm.  That is the law.

As a logical extension of the Second Amendment right to bear arms, Missouri embraces a well-known common-law principle called the Castle Doctrine.  The state’s expansive interpretation permitted the McCloskeys to use physical force to defend themselves and their home while on their own property without requiring them to first retreat.

There is some case law in Missouri that suggests that the couple would not have been permitted to shoot solely in defense of their land surrounding their structured home.  However, the McCloskeys neither shot their weapons nor claim they were protecting merely their land.  Indeed, they say that several members of the mob were armed and vowed to set their home ablaze and murder them.  If true, the couple was completely entitled under the law to brandish (and, potentially, use) physical force in self-defense.

The couple was completely entitled under the law to brandish (and, potentially, use) physical force in self-defense.

How is it possible, then, that St. Louis Circuit Attorney Kimberly Gardner is investigating the McCloskeys but not the mob who allegedly knocked down a wrought-iron gate and knowingly trespassed (signs were posted) on their property?  This is backwards. Repeated threats of physical harm uttered by the mob would constitute an assault under the law.

Yet, Gardner appears to be poised to charge the homeowners with assault over their right to defend against an alleged assault.  Legally, this is not just senseless, but insane.  It is well established that a person is allowed to threaten force if he or she is threatened. The perpetrators do not suddenly become helpless victims when they are averted by a display of force.

The idiocy of Gardner’s reasoning was explained to Fox News by Missouri Attorney General Eric Schmitt who stated that Gardner “has a record of making politically-motivated decisions not based on the law.” No kidding.  Schmitt called her record in prosecuting violent crime “abysmal.”  As chief prosecutor, Gardner cares more about defending criminals than helping victims.  To her, justice is an antiquated bromide.

Gardner’s ethics are indefensible because they are non-existent.  She is under criminal investigation by a special prosecutor for allegedly concealing exculpatory evidence and suborning perjury when she wrongfully indicted the sitting Republican Governor Eric Greitens in 2018 over photographs of a woman with whom he had an affair.  Gardner was later forced to dismiss the case when her devious machinations came to light.  It was too late for Greitens who had already resigned from office.  His lawyer blasted Gardner in court saying, “There is nothing more dangerous than a dishonest prosecutor.”

None of this should come as a surprise since Gardner’s 2016 election was funded, in part, by considerable cash funneled through a super PAC backed financially by far-left billionaire George Soros. Her tenure has been notable only for the slew of lawsuits against her for allegedly ignoring public records requests.  (Gardner appears to believe that the public is not allowed to read public records.)  Her conviction rate in prosecutions has brought solace and smiles to the criminal face.

In a statement, Gardner called the mob “peaceful protestors who were met by guns and a violent assault.”  There are two inconvenient problems with her remarks.  First, Gardner has completely ignored or dismissed the evidence of the trespass and the McCloskeys’ chilling account of the mob’s threats of arson and murder.  Second, by publicly declaring the couple guilty of assault, she has demolished any presumption of innocence owing to the accused.

The Constitution protects free speech, assembly, and peaceful protests.  These are cherished rights.  But the First Amendment does not give license to demonstrators to transform themselves into criminals who engage in acts of threatened violence or other lawless conduct.  The riots, looting, assaults, and murders that have escalated out of control in many cities across America in the aftermath of the George Floyd tragedy are not an excuse under the law to victimize innocent people and destroy property.

Late last week, authorities armed with a search warrant seized the rifle that Mark McCloskey was shown holding the night of June 28th.  His wife’s pistol was already in the possession of their attorney. The seizure, together with Gardner’s statement, leave little doubt that the McCloskeys will soon be facing criminal charges by an elected prosecutor who seems determined to abuse her power by capitulating to the demands of the mob.

Gardner can’t possibly prevail if charges are brought. But I suspect that is not her objective.  Prosecution of the McCloskeys serves a political nostrum.  It would conform perfectly to the prevailing orthodoxy of liberal outrage that no one is now permitted to question without being condemned and/or canceled. We must all recognize and affirm that disagreement, however well reasoned, is no longer tolerated. Ideological purity must be elevated, as dissent is suffocated.  So we are told.

The civil rights leader Martin Luther King, Jr. was a legendary proponent of non-violence.  But he was not an absolutist.  King well understood the moral and legal necessity of self-defense in a society that is not always civilized.  He made this clear when he wrote, “The principle of self-defense, even involving weapons and bloodshed, has never been condemned, even by Gandhi.”

Kimberly Gardner is not condemning self-defense, as much as she is canceling it for purely political reasons driven by self-interest and self-promotion. She has no business being a government prosecutor if she harbors such contempt for the law.