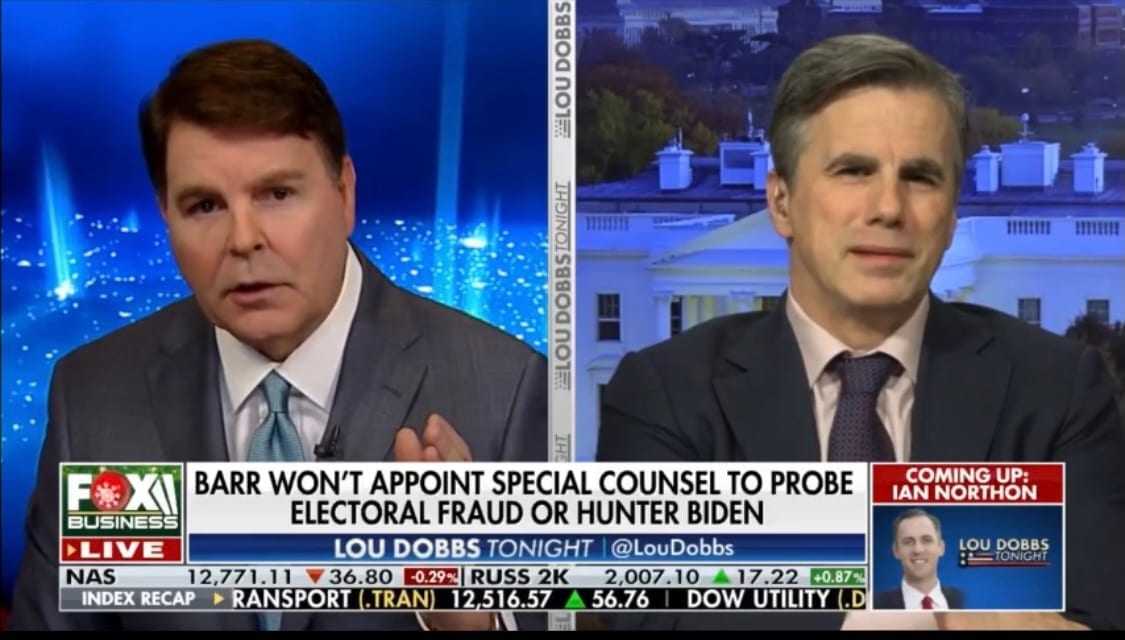 In the wake of a federal investigation into Hunter Biden, the son of the media’s president-elect, the Justice Department has failed to appoint a special counsel despite the egregious conflict of interest.

Tom Fitton, president of Judicial Watch, joined Gregg Jarrett on Lou Dobbs Tonight to discuss how, perhaps, the Justice Department is, too, engaged in the conglomerate effort to protect Joe Biden.

“One hundred percent Bill Barr is wrong in not appointing a special counsel in the hunter Biden case,” Jarrett urged.

“It says very clearly that if there’s a conflict of interest, a special counsel is required,” he added. “Not maybe appointed or, gee, only if you want it on every other Sunday. No, it’s mandatory and I can’t think of a greater conflict of interest than the son of the president being investigated by dad’s justice department. Can you?”

“They’ve had that laptop, for instance, for a year, they took no significant investigative steps for political reasons, obviously, and that needs to be investigated,” he added.

“They mishandled the investigation so we need a separate independent voice taking a look at it and if the acting Attorney General doesn’t want to follow the rules as you suggest, Gregg, he should be ordered to do so by the president and if he won’t do it, the president can put someone else in there until he finds someone who will enforce the rule of law. Or he can appoint a special counsel directly.”

“By my count, seven presidents have directed or appointed special prosecutors since 1875. Seven presidents, including most recently Bill Clinton,” he urged.

And, despite Joe Biden repeatedly saying his son was never involved in foreign business, he still – to this day – owns a percentage of interest in a Chinese company.

“The Wall Street Journal reports today that Hunter Biden still owns 10 percent interest in a private equity Chinese company, which essentially puts a lie to Joe Biden’s many statements about his son and Biden saying, ‘oh my son will not be involved in, anyone in my family involved in foreign businesses,” Jarrett said.

“Hunter Biden is a business partner still with the Chinese Communist government, his prior business partner also associated with the Chinese Communist government has disappeared, so this is a dangerous game he’s been playing and we know from evidence from the laptop, which is increasingly being confirmed, that these deals were in part to take care of Joe Biden,” Fitton warned.

“So, whenever anyone hears Hunter Biden, they should substitute the word Joe Biden,” he added.“Tax issues, bribery issues, money laundering, conspiracy, Foreign Agent Registration Act, extortion, you name it, Joe Biden is implicated in it and anyone who tells you otherwise is just playing politics to protect Joe Biden.”