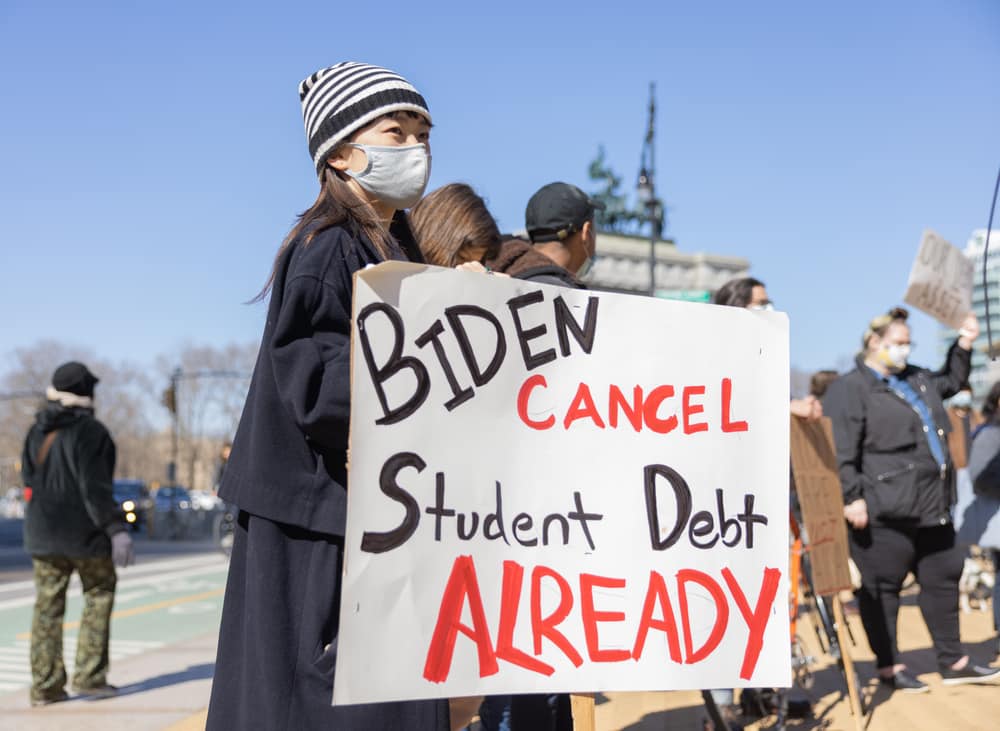 Joe Biden is flipping his middle finger at tens of millions of Americans in his move to effectively cancel student debt.  Typical myopic and unscrupulous Joe.

Realizing that his noxious policies have caused his party to stare down the barrel of an historic trouncing in the upcoming midterm elections, he’s now desperately trying to bribe millennials and “Gen Z” voters by forgiving what they owe.  It won’t work.

A large contingent of that same voting group who worked hard to dutifully pay off their college loans, plus millions who elected to forego a higher education they could not responsibly afford, are massively pissed off, to put it bluntly.

And then there are the parents of young people who scrimped and saved for years so that they could pay for their kids’ exorbitant tuition, room and board.  They poured every spare dollar into college savings accounts.  They drove their cars until they were broken-down clunkers.  They skipped vacations and stayed home.  They took out a second mortgage on their homes or chose not to buy one at all.

Joe is telling those folks they were suckers for their sacrifices.

Biden knows that his presidency is a raging five-alarm fire.  There’s no hope of dousing the flames of his own incompetency.  His poll numbers are at the bottom of the electoral garbage can.  The stench would make any sentient politician faint.  Or quit in disgrace.

Biden’s deficit among young people is especially disastrous.  An abysmal 21% of those under the age of 35 approve of the way the president is handling his job, according to Quinnipiac.  That subterranean faction has its collective head in the sand.

But nearly 60% of young people are paying attention.  They disapprove of Joe.  I doubt that his malignant effort to buy their votes will work.

Trolling for ballots is what Dems do.  They’ve been snookered by AOC and the “uber-woke” crowd to think that everyone is as dumb as they are.  So, Biden enthusiastically signed on to the far-left progressive agenda of debt forbearance or outright cancellation, a war on oil and gas, open borders, BLM forever, a kumbaya approach to criminals, Build Back Better, and trillions of dollars spent on “free stuff.”

Anyone with a functioning brain knows that it’s a recipe for economic and social disaster.  And so it has become.  Historic inflation, rampant crime, border chaos, high gas prices, and rising government debt that will inexorably lead to a recession in which Americans will continue to suffer.

You can never go broke betting that liberals will drive our engine of growth and prosperity into a filthy ditch.  What’s astonishing is how quickly they did it.  With Joe at the helm and Democrats in control of congress, they managed to mangle everything in one short year.  Voters are now afflicted with an acute case of buyer’s remorse.  They can’t wait until November to reverse course.

Their real regret is that they’re stuck with Joe Biden and his vapid shill, Kamala Harris, until January of 2025.  That’s a long passage of time.  Agonizingly so.  One can only image (and fear) all of the havoc and destruction he can wreak between now and then.  This is worrisome since Biden keeps repeating his blunders.

By fiat, he once again extended the pause on student loan payments and interest accrual through August.  He also cancelled debt for some 40,000 borrowers.  If lefties get their way, he’ll continue loan forbearance in perpetuity.  Or simply erase or forgive all of the accumulated $1.7 trillion debt for the remaining 3.6 million debtors.

That’s right.  We’re talking a big number here.  Close to $2 trillion that’s supposed to magically vanish overnight.  Except it doesn’t really disappear.  That’s just a sleight of hand trick.  The burden gets passed along to taxpayers who must bear the financial cost.

That kind of gargantuan give-away is exactly what it appears to be —a naked attempt to reverse the political fortunes of Democrats, but especially Joe Biden.  Rodents have a higher approval rating.

I wonder what will happen if the poll numbers don’t budge?  With the swipe of a pen, will Biden wipe out everyone’s car payments and credit card debt?  Cancel their home mortgages and business loans?  Expunge rental leases?  Oops, he already did that with his eviction moratorium.

If there’s a constant pattern in Biden’s contempt for the rule of law…it’s that he knows he’s exceeding his presidential powers.  No matter.  He does it anyway.  Sometimes he even brags about it.  It’s quite the “f-you” to the Constitution which, by the way, he is duty-bound to uphold.  He treats that esteemed document like a roll of toilet paper to be flushed.

You’ll recall that Biden stated repeatedly that he had no authority whatsoever to order a vaccine mandate.  He did it anyway.  Inevitably, the Supreme Court struck it down.

The same thing happened with his mask mandate.  In September of 2020 he said, “I cannot mandate people wearing masks.”  And then he did.  Once again, his order was tossed out on judicial review.

His abuse of power on eviction moratoriums was even more brazen.  He openly admitted the law did not permit him to do it.  Then, he boasted that he would do it anyway to buy renters additional time to skate on their rent until the nation’s highest court struck down his order —which it did.  Joe didn’t seem to care that he was violating property rights, federalism, and the separation of powers.  But the Supreme Court cared.

Like a card player who deals from the bottom of the deck, Biden is a chronic cheater when it comes to following the law.  At least he’s consistent.  He was kicked out of law school for cheating.  Some habits never die.

The vast majority of Americans deeply resent the idea of forgiving loans for a select group of people.  How is that fair to everyone else?  Why should some get special treatment?  Millions of borrowers who followed the rules and conscientiously paid off their debt are understandably incensed.  And so are the millions who chose not to attend college because they didn’t want to be saddled with debt.

But two of the U.S. Senate’s top wingnuts, Elizabeth Warren and avowed socialist Bernie Sanders, are demanding that Biden eradicate all college debt.  On Sunday’s CBS’s “Face The Nation,” Warren argued that canceling student debt would not be inflationary.  Really?

Warren might want to read the in-depth analysis by the nonpartisan Committee for a Responsible Federal Budget.  They conclude that cancelling all $1.7 trillion of student debt would —quote— “represent a 4 to 20 percent increase relative to the median Federal Reserve inflation rate forecast.”  In other words, it would drive up inflation significantly, which has already reached a staggering 40-year high.

On top of that, the Committee explained how debt cancellation would also inflate tuition costs, which are already ludicrously high.  Finally, loan forgiveness would incentivize further reckless borrowing in an endless and destructive cycle.

Warren doesn’t seem to care.  And why would she?  Her net worth is in the neighborhood of $67 million.  She can easily afford spiraling inflation.  To her, it’s just an inconvenient number.

Warren readily admits that cancelling student debt is purely an election ploy intended to boost the chances of her party in the upcoming elections.  Her recent op-ed in The New York Times (where else?) was entitled “How Democrats Can Avoid Disaster In November.”  Forgiving all loans was the central feature.  It’s the definition of shameless pandering.

Warren doesn’t want congress to abolish the debt.  No, that would make too much sense.  It would conform to the Constitutional which states that congress has sole spending powers under Article 1, Section 8.  Congress also has the exclusive power to “dispose” of debt under Article IV, Section 3.

Instead, Warren wants to take the predictably senseless approach.  She wants Biden to usurp the power of congress and issue a decree as if he were king.  It’s truly frightening to realize that Liz Warren was a law professor at Harvard.  Maybe her students should ask for a refund if their debt isn’t cancelled.

Biden’s loan pause has already cost you, the American taxpayer, more than $100 billion.  His latest extension will add another $15 to $20 billion, as noted correctly by The Wall Street Journal.  “The extension will mostly benefit those who need it the least —higher earners with graduate degrees.”  Forcing hardworking taxpayers to absorb the loss is like robbing the workers to give more to the wealthy.  Or as the New York Post put it, “subsidizing the rich to appease The Squad.”

The Journal also points out that “loan delinquencies have declined steadily throughout the pandemic as borrowers aided by several rounds of stimulus payments reduced their balances.”  So, there’s no crisis here.  Only a golden opportunity for Biden and Democrats to purchase votes at your expense.  Nice scam.

People like Warren know that Biden is constitutionally prohibited from granting the kind of wholesale debt forgiveness that she and Bernie and AOC advocate.  So, they lie about it by employing a clever ruse called “presidential precedent.”  Again, on “Face The Nation,” Warren stated that “President Obama did it, President Trump did it, and President Biden has done it repeatedly…so the power is clearly there.”  Except it’s not.

Warren claimed that cancellation is —quote— “already in the statute.”  Very clever.  She’s right, but only barely.  It’s true that the Higher Education Act of 1965 gives the Secretary of Education the power to waive student debt.  But what Warren is not telling you is that such a waiver or cancellation is strictly limited.  It only applies to a very narrow set of circumstances where, for example, a borrower becomes permanently disabled or where the lender committed fraud or where the borrower works in public service for ten years.

The same law that Warren cites actually proves she’s wrong.  Under the Act, the president does not have the power to abolish all student debt.  He does not possess such unlimited and unilateral authority.

Indeed, the opposite is true: only congress has the authority to dismiss this kind of debt.  As a lawyer, I assume she knows this.  But she is choosing instead to deceive the American public by manipulating the statute and concealing the truth.

There is no appetite in congress to do what the progressives are demanding.  The votes are not there.  So, Warren is trying to pressure a weak president into doing what congress cannot accomplish.  It’s both shrewd and diabolical.

House Speaker Nancy Pelosi, for all her flaws, is at least more honest about it.  “People think that the president of the United States has the power for debt forgiveness,” she said during a press conference. “He does not. He can postpone, he can delay, but he does not have that power. That has to be an act of Congress.”

Pelosi is right, of course.  The Framers gave the power of the purse to congress, not the president.  This includes taxation, spending, loans and disposition of debt.  Not that Biden would ever know that.

So, I won’t be surprised if Joe decides to ignore the Constitution and the written statutory law.  He’s done it before, and he’s prone to doing it again.  He’s a desperate leader who has created desperate conditions for the nation.

It would therefore follow that he’ll embrace yet another desperate act to save himself from the ugly consequences of his own incompetence.

Joining me now is Carol Roth who once upon a time was an investment banker.  She’s an entrepreneur and author of the book, “The War on Small Business: How The Government Used The Pandemic To Crush The Backbone Of America.”  She also penned the New York Times bestselling book, “The Entrepreneur Equation.”

In this article:featured, Podcast, Student Debt