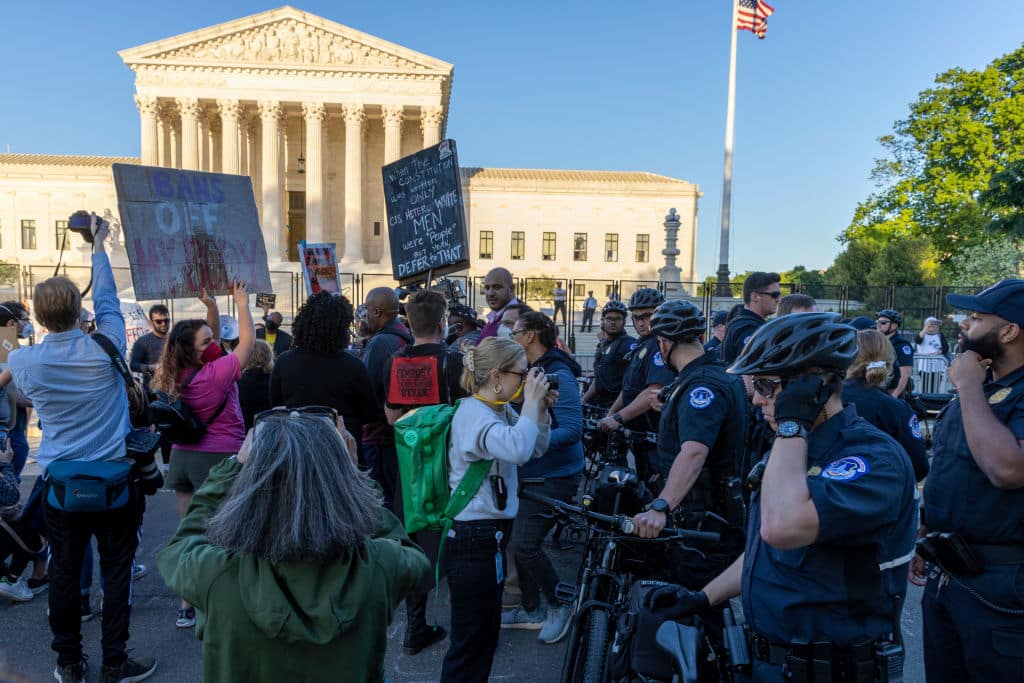 As angry mobs armed with profane placards shouted outside the family homes of conservative Supreme Court Justices, I thought of Teddy Roosevelt who once said, “The most practical kind of politics is the politics of decency.”

There is nothing practical in the veiled threats of these abortion activists.  There is only a want of decency and a conspicuous want of sense.  I don’t begrudge sincerely held beliefs.  But our actions define us, not our beliefs.  Zealous ideology is a poor substitute for civility.

The issue here is not free speech, mind you  The protesters have every right to voice their grievances against the government.  But an appropriate time, place, and manner should be honored.  Raucous and rude demonstrations at the threshold of someone’s home is an affront to ordinary human respect.  Targeting Catholic Churches with harassment during Sunday worship services is repulsive by any standard.

President Joe Biden has had ample opportunity to condemn these brazen acts of intimidation, but refuses to do so.  Never overestimate Joe Biden’s sense of decency.  He has proven time and again that he is morally bankrupt.  He has chosen to side with liberals who celebrate these outrageous personal and religious attacks.  A true leader connects with people, he doesn’t incite their hatred.

Biden has also forsaken any attempt to denounce the person who leaked the draft of a Supreme Court opinion that is on course to overturn the 1973 Roe v. Wade decision that granted pregnant women the right to an abortion.  Regardless of where you stand on the issue, protecting the integrity of the nation’s highest court is vital.   Predictably and shamefully, Biden has chosen to join the rowdy mob that wants to tear it down.

Our Constitution enshrined the unalienable rights of man that are based on principles of freedom, compassion, and understanding.  They are foundational to the great American experiment.  Decency is at the core of our democracy.  It is the beacon that guides us.  But our current president places partisan political gain above all else.

In so doing, Joe Biden favors the politics of rage over earnest dialog and decency.

At his inaugural address, Joe Biden promised to end the uncivil war of political discourse in America.  He vowed to be a uniting healer.  It was a sham.  His presidency has accomplished the exact opposite.  America is now more divided than ever.  And Biden is responsible.  On every issue, he has chosen to gin up anger and discontent —on race, voting laws, immigration, parental rights, gender identity, and now abortion.

You’ll recall that Biden sent the FBI to go after parents as domestic terrorists.  He called Georgia’s election bill the resurrection of Jim Crow.  And he incited racial animus with this shameful speech where he scolded:

Thanks to Biden’s demagoguery, America is a political powder keg.  He continues to light the fuse.

After the Supreme Court draft opinion was leaked, Biden engaged in blatant fear mongering by stating that the court would soon outlaw contraception, interracial marriage and gay marriage.  Then he took it a step further by asking, “What happens if states change the law saying that children who are LGBTQ can’t be in classrooms with other children?  What are the next things that are going to be attacked?”

It’s utter nonsense, of course.  But Biden doesn’t care.  He seeks to agitate and inflame by deception.  Justice Samuel Alito, who penned the draft opinion, specifically discounted the impact on other cases because their rights derive from other guarantees in the Constitution, such as the Equal Protection Clause.  Moreover, these other protected rights are deeply embedded and universally accepted, unlike Roe v. Wade.

By contrast, the Roe decision was based on an imaginary right to privacy that can be found nowhere in the Constitution.  It is not in the text, logic, reasoning or understanding of the Constitution.  Justices have spent nearly 50 years struggling to defend the indefensible.  By finally correcting the wrongfully decided Roe v. Wade case, the high court is not ruling that there will be no abortions in America.  Not at all.  The Justices are simply stating that it’s none of their business.

Instead, it’s the business of democracy.  If the people want a right to abortion or if they want to ban or restrict abortions, that’s the job of their elected representatives.  Congress could codify such rights in federal legislation or lawmakers could do the same in their respective states.  If enough Americans agree that the Constitution itself should address the issue of abortion, a constitutional amendment could be passed.

But that hasn’t happened over the last half a century for one simple reason —the votes are not there to pass such a law on the federal level.  It is not up to the Supreme Court to do what the legislative branch has failed to do.

That fundamental fact did not stop Vice President Kamala Harris from expressing her contempt for the court: “How dare they tell a woman what she can do and cannot do with her own body!  How dare they!”

How dare they?  The Supreme Court’s power to decide such matters is found in the Constitution…and reinforced by the landmark decision of Marbury v. Madison.  Harris might want to read both documents.  She obviously overlooked them in law school.  Perhaps she’d actually learn something instead of deceiving her audience with an abundance of ignorance.

Harris is not the lone ranger.  Other Democrats in congress are equally oblivious.  Rep. Rashida Tlaib, a member of “The Squad,” who clearly knows nothing about the law or the Constitution, stated with absolute certainty that the Supreme Court did not have the legal authority to overturn Roe because it had become an established precedent.

Here’s a quick lesson for the clueless Tlaib.  Just as the court had the power to render its poorly reasoned decision 49 years ago, it also has the authority to reverse the decision it now believes was mistakenly made.  Precedents are fine…until they are not.  It’s not a novel concept.  The Supreme Court has overturned its own constitutional precedents more than 145 times.  That number reflects how many times the court has made mistakes.

The Supreme Court is composed of learned lawyers.  But in the end, they are just people.  They are susceptible to making errors because they are as fallible as the rest of us.  The court should never abide by an erroneous decision simply to justify the legal principle of precedence known as stare decisis.

It is always incumbent on the high court to reconsider past decisions and, if necessary, right a wrong.  If it were otherwise, we would still be functioning under the infamous Dred Scott decision that deprived African-Americans of constitutional rights.  Plessy v. Ferguson, another disgraceful decision approving racial segregation, would still be the law of the land.

Plessy stood intact for an agonizing 58 years before the Supreme Court finally struck it down in Brown v. Board of Education.  Other bad decisions stood even longer.  Erie Railroad v. Tompkins lasted nearly 100 years until the high court came to its senses and reversed itself.

If far-left politicians had a greater understanding of the Constitution and Supreme Court history, they would better serve their constituents.  But it still wouldn’t halt the anger and incitement that has, sadly, become an all too frequent feature of the Democratic Party.

When abortion activists threaten Supreme Court Justices at their homes and attempt to bomb or burn Right To Life buildings, they are taking their cues from prominent Democrats who have employed ugly rhetoric that approaches the boundary of violent acts.  Senate Majority Leader Chuck Schumer notoriously stood on the steps of the Supreme Court and shouted, “I want to tell you, Gorsuch; I want to tell you, Kavanaugh: You have released the whirlwind and you will pay the price.  You won’t know what hit you if you go forward with these awful decisions.”

Schumer sounded foolishly threatening when he warned Justices not to vote against abortion rights.  The abortion activists who are now menacing those same Justices were listening.  They are following Schumer’s lead.

Joe Biden ceded power to the lunatic fringe on the left.  Then he joined the chorus.  In his speeches, he has demonized his political opponents as “enemies of the state.”  As he ramped up fury over the reversal of Roe, Biden said, “The MAGA crowd is really the most extreme political organization that’s existed in American history.”

In one short statement, he vilified more than 70 million Americans who voted for his opponent.  It was reminiscent of Hillary’s demeaning remark that half of Republicans are “deplorables.”

It is a pathetic testament to Joe Biden’s lack of decency.

In this article:abortion, featured, Podcast, Protests