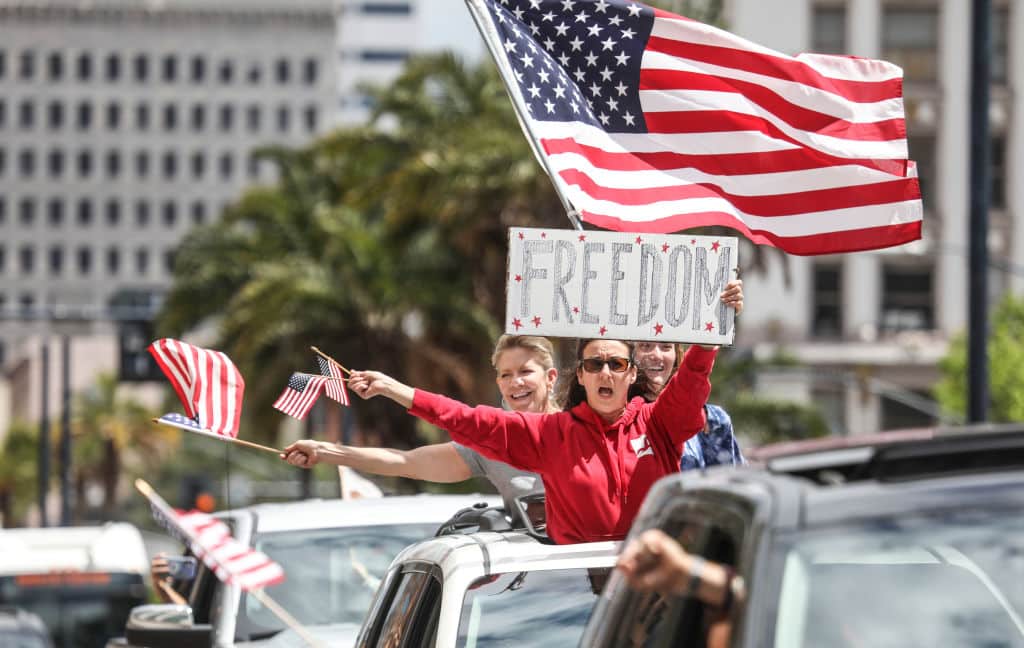 “It’s a joke, right?  No one would be that stupid.”  Then, I remembered that Joe Biden is president.  He’s adept at doing dopey things.

That was my first impression when I heard that Biden and his minions were creating a Disinformation Governance Board.  It’s more than ironic that DBG sounds a lot like KGB.  The new dystopian board has been roundly lampooned as a “Ministry Of Truth” reminiscent of the two Josephs —Goebbels and Stalin.  It’s an apt comparison.

The Nazis and Soviets relied on scurrilous propaganda to reinforce their power as they shuttered free speech and subjugated their people with ruthless force.  If Biden thinks he can do the same, he’s more delusional and inept than I ever thought.

To make matters worse —if that’s even possible— a notorious wackadoodle was selected to be the czar of the DGB.  Do a quick internet search of Nina Jankowicz and you’ll find a constellation of head-banging tweets and videos. Her Mary Poppins songfest about disinformation that’s posted on TikTok is so cringy it’ll make you hurl into the nearest wastebasket.

Jankowicz isn’t qualified to run a popcorn stand.  Yet, under the guise of battling disinformation, this self-appointed expert will be telling us what to read, watch, and think.  She’s not a “truth expert,” she’s an embarrassing caricature.  She’s a carnival barker who has managed to carve out a bizarre career advocating public and private censorship.  She claims that free speech marginalizes women and communities of color.

This is the same person who relentlessly labeled the Hunter Biden laptop story a fairytale and a “Trump campaign product” of misinformation.  It was not.  She called Christopher Steele, who helped fabricate the Russian collusion hoax, a great historian on the “evolution of disinformation.”  She promoted his phony anti-Trump “dossier” which turned out to be a collection of incendiary lies.

You get the picture.  Jankowicz will condemn an accurate story as fraudulent if it hurts Democrats but extol a lie if it damages Republicans.  She’s a hyper-partisan who behaves as the sworn enemy of free speech and diverse opinions.  Given her own record of spreading disinformation, she should target herself first.  But she won’t.

Funding a free speech overlord is how your hard-earned taxpayer dollars will be spent.  Tread carefully.  You’ll be attacked if you dare speak ill of Biden or disagree with his progressive policies.  You’ll be silenced and accused of spreading misinformation.

So, welcome to our new Ministry Of Truth.

This invites the question, what’s true and what is false?  Henceforth, the government will operate as the quintessential fact-checker.  But what if the fact-checkers are hopelessly biased?  Who will check them?  No one, if Joe Biden gets his way.  And if you try, you’ll probably get banned or banished.  We don’t know quite yet.

What we do know is that the liberal elites are in full meltdown over Twitter’s takeover by billionaire entrepreneur Elon Musk.  To his credit, he has promised to end the shadow-banning of conservatives, block the secretly punitive algorithms that favor liberals, halt politically motivated censorship, and remake the social media giant into a haven for freedom of expression and diverse content.  In other words, Musk intends to level the playing field.

No wonder the far left has its knickers in a bunch.  With Biden’s presidency a smoldering wreckage, and with Democrats facing a tsunami of opposition in the mid-term elections, Homeland Secretary Alejandro Mayorkas has devised a way to stifle dissent.  With Biden’s blessing, he intends to conflate legitimate criticism with disinformation.  They are not remotely the same.  No matter.  Mayorkas himself is a pro at peddling easily disprovable deceptions.  What’s one more?

You would think that a guy who’s in charge of solving the border crisis that has grown exponentially worse under his watch would have better things to do than attack free speech.  Perhaps he’s deranged enough to think that he can incinerate criticism by weaponizing the power of the federal government to abridge the rights of citizens under the First Amendment.  Frankly, he should resign in shame for his chronic incompetence compounded by malice.

Mayorkas claims that he’s only focusing on foreign disinformation.  Don’t believe it.  In our increasingly interconnected and global marketplace of ideas and information, modes of communication draw no such distinction.  I’ll give you an example.  There was credible evidence that COVID-19 leaked from a Chinese lab.  But both Twitter and Facebook suppressed it under the pretense of foreign disinformation, despite domestic evidence that it was plausible.

The other example is well-known.  Hunter’s incriminating laptop was branded as Russian disinformation by a gaggle of unscrupulous former American intel officials who were determined to conjure up a lie to protect Joe Biden in advance of the presidential election.  Details about the laptop were blocked on social media because it’s all to easy to slap the label of foreign misinformation on what is really a cover-up of truthful information here in the U.S.

Will the DGB fact-check Biden and his obsessive lies?  Don’t count on it.  You’d need a calculator to tally them all.  CNN tried.  It recounted dozens of Biden lies in his first year alone, and that network is among his biggest cheerleaders.

Biden falsely claimed that Putin is to blame for inflation, automobile costs have gone down, you won’t get COVID if you are vaccinated, U.S. border agents whipped Haitian migrants, Pentagon generals never told him to maintain forces in Afghanistan, he was against the war from the beginning, and Al Qaeda is gone.  Biden also told whoppers about employment, wages, immigration security, and repeatedly misstated what Georgia’s election law said.  His statements are all demonstrably false.

Then there’s Adam Schiff.  He’s the godfather of lies.  But he’s a Democrat, so in the liberal-run social media universe lies are perfectly okay.  Indeed, it’s encouraged.  But it’s also hypocritical, since Biden and Schiff have pushed hard for censorship on the most popular platforms.  As law professor Jonathan Turley observed, “President Biden already has established himself as arguably the most anti-free speech president since John Adams.”  Turley is right.

So from whence did this new suffocation of thought and expression arise?

Barack Obama’s fingerprints are all over it.  He’s the one who germinated the insane idea for a Ministry Of Truth.  That’s the theory of Democrat Tulsi Gabbard who stated that “Biden is just a front man.”  She’s right.  The former congresswoman noted that a mere six days before the DGB was revealed to the public, the ex-president openly railed against the evils of disinformation and claimed that social media censors “don’t go far enough.  He demanded aggressive government regulation.

In politics, there’s no such thing as a coincidence.  One venal thought invariably leads to another, more corrupt act.  Almost overnight, Biden took his marching orders from Obama by establishing the Disinformation Governance Board.

Biden and Obama are both lawyers.  They well know that the Constitution prohibits the government from infringing on free speech rights and that any state censorship must meet an exceedingly high burden.  So, they invented a subterfuge.

They claimed the DGB would only focus on foreign disinformation, and they declined to say how it might be enforced.  It’s a clever feint.  Until Biden sics his censors on someone, no constitutional challenge will be ripe.  Or maybe their goal is to pressure companies like Twitter and Facebook do their censorship dirty work for them.

Declassified documents show that then-CIA Director John Brennan met with Obama in the Oval Office on July 28, 2016 and advised that his intelligence agency had uncovered compelling evidence that Hillary Clinton had manufactured the lie that Trump was colluding with Russia.  The president was informed that she approved a plan two days earlier to smear Trump by framing him as a Kremlin asset.  Her intent was to trigger an FBI investigation, leak the disinformation to the media, improve her election chances, and distract from her own email scandal.  It was a diabolical scheme and an unconscionable dirty trick.

Did Obama take any action to expose Hillary’s disinformation campaign against her opponent?  No.  Did Obama inform the FBI of the true facts and instruct Director James Comey to shelve his nascent investigation?  No.  Instead, Obama allowed the lie to gain traction and fester.  Biden was in on it.  The media predictably defiled Trump as a Russian stooge, the FBI escalated its probe, and a special counsel was appointed to conduct a dilating investigation that seriously hampered the new president throughout his term.

Obama, Clinton and Biden are among the worse disinformation propagandists in modern American history.  It is a farce for them to now embrace the mantle of righteous indignation over political lies.  They are doing it now only because they fear the truth.  It does not favor them.

When a public leader cannot succeed by the merits of his accomplishments, he resorts to a cavalcade of lies to coverup his own malfeasance.  He pushes a relentless series of false narratives and seeks to undermine lawful discourse.  This is Joe Biden.

But now, he is taking it step further by stamping out dissent to prop up his failing presidency.  It won’t work.  As I’ve noted before, Biden sits atop of a house of cards that will come tumbling down under the weight of his own noxious policies and persistent incompetence.

Freedom is the antidote to tyranny.  It serves as an essential check on authoritarian rule.  And the most precious freedom in our constitutional republic is enshrined in that esteemed document’s Bill of Rights.  First among them is the right to speak freely and to criticize our own government.

If that freedom is extinguished, so is our democracy.

Joining me now to talk about it is Carl Szabo who is Vice President and General Counsel for NetChoice.  He analyzes tech-related legislative and regulatory initiatives that impact online companies.  Carl is also an adjunct professor of internet law at the George Mason Antonin Scalia Law School.

In this article:disinformation, featured, Podcast, The Brief