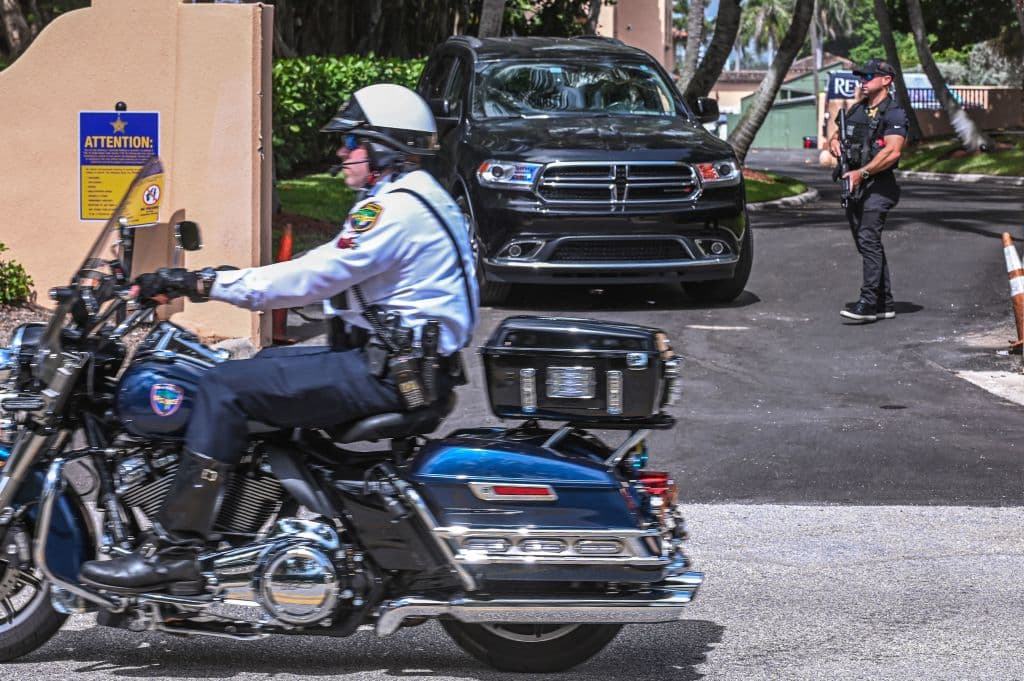 “Equal Justice Under Law” is engraved on the ornate pediment above the entrance to the U.S. Supreme Court.   The Department of Justice and the FBI continue to hurl eggs at it.

Monday’s pre-dawn raid by a battalion of FBI agents on former President Donald Trump’s Florida home represents an abandonment of the cherished principle embedded in our Constitution that the law will be equally applied to all of its citizens.  Instead, political status now dictates whether a person receives fair treatment in a supposedly fair justice system.

If you check the box marked “Republican” on a political affiliation form, brace yourself for persecution and prosecution.  If you check “Democrat,” you’ll be granted special elevated status.  You’re untouchable.  Just ask Hillary Clinton and Hunter Biden.

The evidence is indisputable that Clinton, while serving as Secretary of State, converted tens of thousands of government records to her private email server in the basement of her home.  In simple terms, she was stealing.  She committed at least 110 crimes under the Espionage Act representing the number of documents that the FBI determined were classified and top secret.  She jeopardized America’s national security by exposing vital secrets to our enemies.  The State Department discovered her computer was successfully hacked.

But that’s not all.  When Congress instructed Clinton to preserve all of her documents, she destroyed more than 30,000 of them while wiping her server clean by using file-deleting software.  Her mobile devices were broken in half or demolished with hammers.  Her willful destruction of government property constituted another set of crimes, including obstruction.

Did the FBI ever raid Clinton’s home in Chappaqua, New York, to seize the incriminating evidence she kept there?  No.  Just the opposite occurred.  Without authority, then-FBI Director James Comey absolved Clinton despite overwhelming evidence of criminality that he spelled out in his infamous July 5, 2016 news conference.

Months later when Comey was fired for usurping the power of the Attorney General, he stole government documents from the FBI.  He did it for the admitted purpose of leaking them to the media to trigger the appointment of a special counsel to investigation Trump over phony allegations of Russian “collusion” that Hillary invented and the FBI exploited.  We know how that capacious witch hunt turned out.

Did the FBI ever raid Comey’s home to retrieve the documents he pilfered?  Did the DOJ charge him with theft of government property?  Of course not.  Don’t be silly.

This brings us to Hunter Biden.  His notorious laptop contains a trove of damning documents and emails that offer compelling evidence of multiple enrichment schemes with foreign entities that forked over millions of dollars for access to Joe Biden and the power he wielded as Vice President.  Instead of a multiple count indictment for influence peddling, money laundering, tax fraud, and foreign lobbying crimes, a four-year investigation has produced nothing.

Did the FBI ever raid Hunter’s home to obtain additional evidence?  Or Joe Biden’s home, since the laptop implicates him as involved in his son’s profiteering scams?  You know the answer.  Don’t be dense.

The FBI doesn’t abide by the law when Democrats are involved.  The agency obstructs it.  They’re running a protection racket for the Bidens.

Recently we learned that “highly credible whistleblowers” within the bureau exposed an internal “scheme” by senior officials to bury evidence of Hunter’s corruption by falsely portraying the laptop’s contents as “disinformation” from foreign intelligence sources.  Those same officials then allegedly sealed the truth in a file that only they could access.

Don’t forget –the FBI had the computer in its possession since December of 2019 and knew it was real.  The contents were fully analyzed and overflowing with evidence of influence peddling.  But the agency and the Justice Department kept it under wraps, taking no action to charge or prosecute.

Ten months later when news of the laptop broke, 51 former intelligence agents publicly bashed it as Russian disinformation.   The FBI knew it was a lie that the bureau helped invent.  So, officials remained mute to help Biden get elected.

FBI Director Christopher Wray has done nothing to cleanup his cesspool of an agency.  He seems more interested in covering up acts of malfeasance and misfeasance.  But the FBI is not alone in abusing its powers to protect partisan allies and punish political adversaries.  The whistleblowers have also identified a top official within Merrick Garland’s Justice Department who has done the same.

The attorney general, who was appointed by Biden, is overseeing the investigation of his boss’s son.  To the extent that the president was a participant and beneficiary in Hunter’s schemes, Garland has a disqualifying double conflict of interest.  Yet, he has refused to appoint a neutral special counsel even though it is mandatory under federal regulations.

Garland despises Republicans for denying him a seat on the U.S. Supreme Court.  Covering up for a Democratic president is his vengeance.  He’s the attorney general in name only.  Like Robert Duvall’s character in “The Godfather,” Garland serves as Biden’s “consigliere.”  He’s Joe’s protector, by hook or by crook.

As long as Garland and Wray preside over our nation’s law enforcement, “Equal Justice Under Law” is a farce.