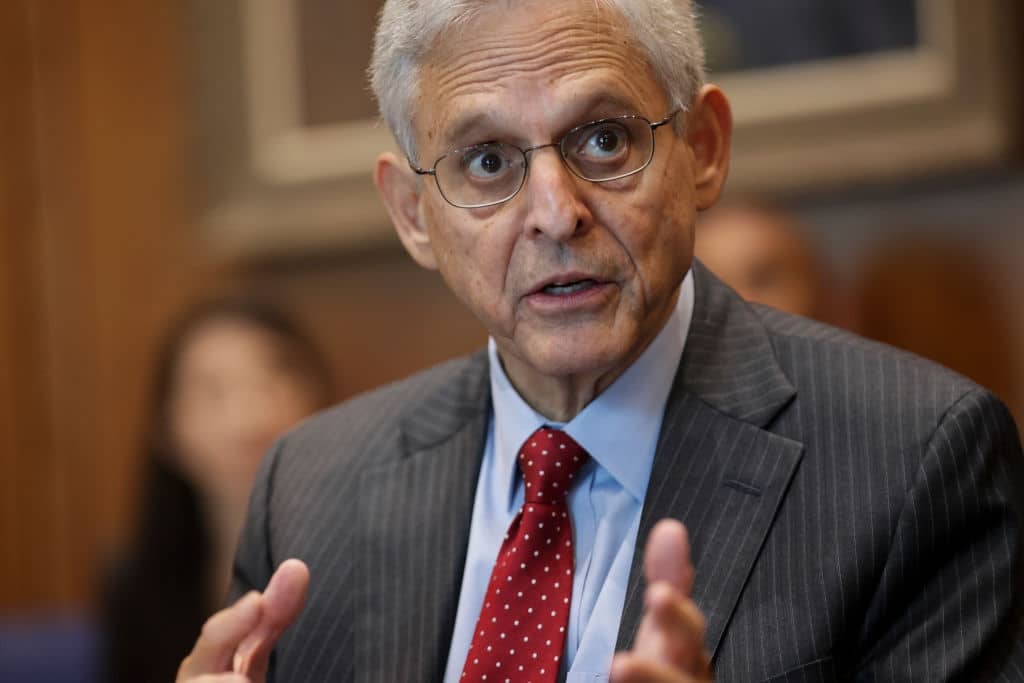 Attorney General Merrick Garland has hijacked the Department of Justice.

No longer is it dedicated to “upholding the law,” as it boasts on the DOJ website.  Under Garland’s shady leadership, the once premiere department has devolved into a corrupt political machine that targets adversaries and protects partisan allies.

The attorney general’s latest political attack is directed squarely at Joe Biden’s nemesis, Donald Trump.  Biden insists he’s running for re-election, despite his chronic incompetence, alarming senility, and abysmal poll numbers.  Maybe Joe will run a “Weekend at Bernie’s” style campaign… with aides propping him up to present the illusion that he’s got a pulse.

But Garland is taking no chances.  He is moving aggressively and shamelessly to knock out his boss’s expected opponent in the 2024 race —the evil “Orange Man” who currently resides at the posh Mar-a-Lago compound in Palm Beach, Florida.

There, a battalion of FBI agents backed by a phalanx of tactical support (guys with bulging vests and big guns) descended on Trump’s home in the dark of the night.  They spent ten hours ransacking the joint and snooping around Melania’s closet.  No one was allowed to watch as they turned the place upside down and carted off their boxes.  The former president’s lawyers were banished to the sweltering heat outside.

In his five-minute news conference four days later, an indignant Garland bragged that it was all done on his orders.  And then he launched into a pathetic defense of his actions that stands as a one-man monument to hubris and guile.  While wrapping himself in the cloak of victimhood, Garland exhibited about as much rectitude as the late con-man, Bernie.

Garland’s press gambit resembled amateur night at the local comedy club.  It was laughable, only if you had a twisted sense of humor.  He unwittingly undermined his own argument for the imperative of his warrant when he stated, “It is standard practice to seek less intrusive means as an alternative to a search.”  Did the attorney general abide by his own rules?  No, he did not.  He must think everyone is as dumb as he is.

You’ll recall that the DOJ and FBI served Trump with a “less intrusive” subpoena in early June.  The former president complied and turned over the requested documents.  When government officials decided they wanted even more records, why didn’t Garland simply issue a second subpoena?  Trump’s capitulation in the first instance strongly indicates he would have done so again.  Why undertake a harshly invasive raid in the pre-dawn hours?

It makes little sense unless the purpose of the warrant was dishonest and served merely as a pretext for the FBI to rummage through Trump’s home in the hope of seizing anything that Garland could exploit for a different objective.  Is this an investigation in search of some other crime, perhaps an imagined seditious conspiracy connected to the January 6, 2021, riots at the Capitol?  It sure looks like it.  If it is, then Garland’s conduct is both unethical and wrong.  It constitutes an egregious abuse of power under the guise of legitimacy.

Distrust of the attorney general’s motive is compounded by the method he chose in securing the warrant.  Instead of soliciting the approval of a federal district court judge for an intrusion of this magnitude, Garland and his confederates chose a low-level magistrate who is not a presidentially appointed and congressionally approved judge. He can more easily be snookered.

An experienced jurist would have posed challenging questions about why the government was not utilizing another subpoena.  Was the magistrate, Bruce Reinhart, deceived or misled?  It would not be the first time.  During the infamous Russia hoax, an FBI lawyer altered emails to gain a federal warrant to spy on the Trump campaign.  That official, Kevin Clinesmith, later pleaded guilty to a felony.  The FISA court that was duped later excoriated the bureau for its chicanery.  An inspector general found that the FBI had a habit of lies, concealment, and manipulation when seeking warrants.

It is also troubling that Reinhart —prior to his appointment as a magistrate— posted anti-Trump opinions on social media attacking the president’s moral character.  Six weeks before he signed off on the Mar-a-Lago warrant, Reinhart recused himself from a different case involving a Trump lawsuit by citing his own personal bias and lack of impartiality.  Why, then, didn’t he also disqualify himself under the same statute when presented with the Trump warrant?

Another laughable moment in Garland’s press conference came when he feigned transparency by announcing that he was seeking the public release of the warrant and inventory list of materials seized.  You’ll notice he did not ask that the most important documents of all be made public —the affidavits in support of the warrant.  He continues to conceal them.

Those sworn statements by FBI and/or DOJ officials offer the reasoning and justification for the raid.  They would also reveal whether the government withheld vital information from the magistrate or misrepresented the facts in order to secure his signature.  Trump is now demanding that the affidavits be release.  Don’t hold your breath.  Garland is determined to hide any evidence of how his warrant was obtained, by hook or by crook.

The former president also insists that documents previously designated as classified and top secret were declassified by him before he left office and that he was more than willing to convey them to the National Archives upon request.  If Garland was so concerned about America’s national security being jeopardized, why did he wait so long before launching such aggressive action to recover the records?  Agents reportedly learned about the additional material some two months earlier.

Garland’s thuggish authoritarian tactics make it clear that this is not a dispute over federal documents.  The Federal Records Act is a civil statute with no enforcement mechanism.  No one can be charged criminally under the Act.  That inconvenient fact prevented Garland from raiding Trump’s home.  So the attorney general conjured up three criminal statutes that he tossed into his warrant application.  That got him past the gate at Mar-a-Lago, but it won’t sell in a court of law.

To prove a case that Trump stole government records —including allegedly classified documents— prosecutors would first have to establish that he misappropriated the material deliberately.  Indeed, all three of the federal statutes cited in the probable cause warrant require that a person act “willfully” (18 USC 2071) or “knowingly” (18 USC 1519) or “intentionally” (18 USC 793).

These analogous terms mean exactly what they say.  They describe the subjective state of mind or mental objective behind an individual’s actions.  To prevail, Garland and his lawyers would have to show actual knowledge by Trump of wrongdoing and that he intended to break the law.

So, for example, if Trump wanted to keep records that he thought belonged to him —even if his belief was mistaken— the statutes don’t necessarily apply.  If he relied on staffers and lawyers to audit and inspect reams of documents shipped in boxes to Mar-a-Lago in Palm Beach, he cannot be held vicariously culpable for the errors made by others.

The above-referenced federal codes identified in the controversial warrant are not “strict liability crimes” where intent or mental state are irrelevant.  Just the opposite is true, as the language of the statutes plainly state.  This renders any potential case against Trump problematic, if not anemic.

Garland claims that he is “applying the law evenly, without fear or favor.”  That is a comical assertion from an attorney general who refused to enforce the law by arresting demonstrators who issued ugly threats outside the homes of conservative Supreme Court Justices in clear violation of federal statutes.  And then there was his targeting of concerned parents who dared to complain to school boards about policies with which they disagreed.  Is treating them as “domestic terrorists” Garland’s idea of sound law enforcement?  In both cases, the attorney general bowed to the woke mob.

If upholding the rule of law and applying it “evenly” is so precious to Garland, why has there been no raid or indictment of Hunter Biden despite a trove of incriminating evidence that he ran multi-million-dollar foreign influence peddling schemes by selling access to his powerful father?  The attorney general is clearly running a protection racket for his boss, President Joe Biden, and his corrupt son.

Garland pretends that no one is above the law.  But his actions suggest otherwise.  Partisan allies receive special treatment while political opponents are persecuted and punished.  Abuse of power and unequal application of the law are now the hallmarks of his poisonous tenure.  The raid of Trump’s home that the attorney general personally approved is the latest illustration of his dangerous paradigm.