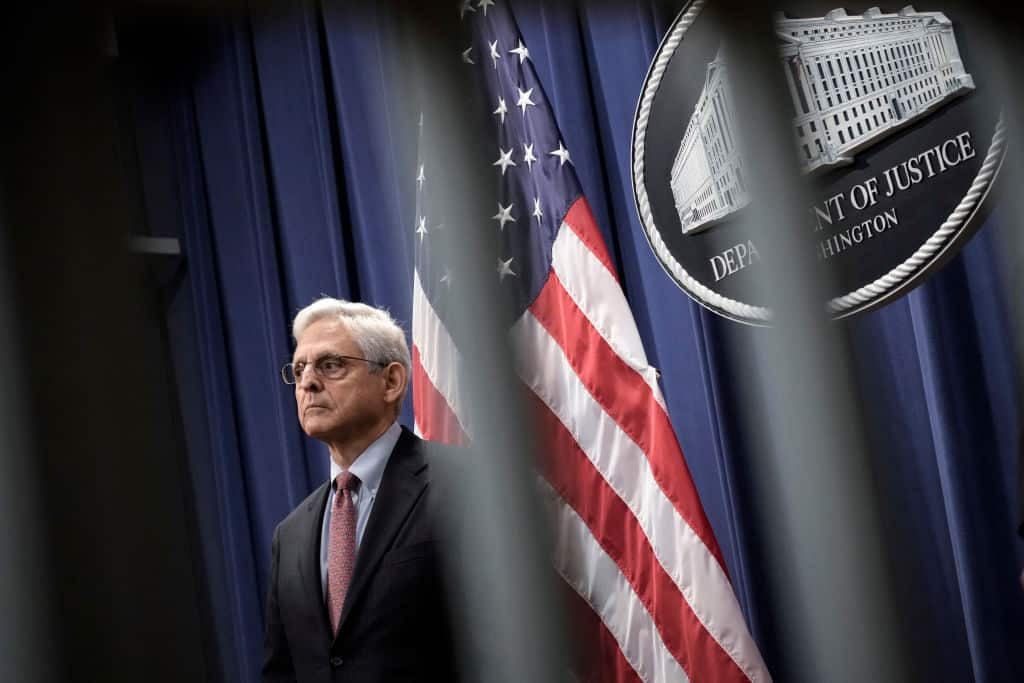 That was some of the reasoning behind U.S. District Judge Aileen Cannon’s decision to appoint a special master to scrutinize the capacious no-limits search and seizure at the home/office of former President Donald Trump.

On Garland’s direct order, the FBI swiped everything except the carpets and chandeliers.  The volume of material they grabbed was stunning, as Judge Cannon recounted: “approximately 11,000 documents and 1,800 other items”

Agents didn’t confine themselves to confiscating the disputed presidential papers.  While ransacking the joint, they snatched Trump’s “personal effects without evidentiary value,” said the judge.  That included medical documents, tax correspondence, accounting information, photographs, newspaper articles, and even clothing.  If Trump had a dog, the poor mutt would have been frisked.

Garland and his FBI confederates were indiscriminate.  They vacuumed “upwards of 500 pages of confidential material protected by the attorney-client privilege,” the judge noted.  That doesn’t include copious documents covered by executive privilege.  The AG claims his investigators haven’t eyeballed any of them; only his own self-appointed “taint team” has read them.  Right.

Judge Cannon wasn’t buying it.  No reasonable person should.  Taint teams are themselves tainted because they work for the same boss and have a shared interest.  Moreover, both the DOJ and the FBI have a shameful history of slimy and dishonest tactics.  Remember the Russia hoax?  So, you can bet that investigators know all about the contents of Trump’s confidential records.  The judge put a lie to Garland’s claim when she cited at least two incidents in which four investigators had already looked at privileged documents.

Cannon also took notice of Garland’s determined effort to convict the former president in the court of public opinion.  She described the “improper” leaking of derogatory information to the Trump-hating media —blabbing the contents of the very documents the AG wants concealed.  The published stories were widely disseminated to slime the former president, just as Garland calculated.  In court, DOJ lawyers tried to dismiss the prodigious leaks as merely “unfortunate.”  But it was much more than that.  It was deliberate and corrupt.

Judge Cannon zeroed in on the “potential harm” and irreparable injury” associated with the Justice Department’s actions, leaving Trump under public “threat of future prosecution.”  She correctly stated that this indelible stain cannot be easily erased.  She added, “The stigma associated with the subject seizure is in a league of its own.”

Of course, that was the underlying intent of Garland’s raid and his malevolent leaks —damage Joe Biden’s political opponent while elevating the chances of Democrats in the upcoming election.

It must be embarrassing for Merrick Garland.  He’s a former federal judge who just got slapped down by a current federal judge.  But that’s what happens when you make unintelligible arguments in court.

Take for example the AG’s comical claim that Donald Trump did not have “standing” to challenge the FBI’s search and seizure at his home.  In her ruling, Judge Cannon delivered the kind of tutorial on the fundamentals of the law that is normally reserved for first year law students. It is a legal given that Trump had the right to contest what was taken from his home and seek its return.  That pesky Fourth Amendment is something the DOJ wants to ditch.

Garland’s other baseless claim was that Trump had no ownership interest in the property seized.  Forget all of the personal items that were taken, the former president certainly has a right to go to court to argue that he does, in fact, have a proprietary interest in presidential records, as well as privileged documents.  As the judge explained, it’s not up to the attorney general to pronounce “an ultimate judgment on the merits” of the case.  Touché.  The imperious Garland forgets that he’s no longer wearing a black robe while ruling the roost.

At every turn, the Attorney General has chosen an authoritarian or dictatorial approach.  No compromises and no negotiations over the seized documents.  Shut up and capitulate.  How dare anyone question the almighty AG.  Garland roundly rejected having an independent and neutral special master step in.

This dogmatic attitude disregards the need for at a minimum, the appearance of fairness, said the judge.  Quoting a higher court, Cannon wrote, “Prosecutors have a responsibility to not only see that justice is done, but to also ensure that justice appears to be done.”  Enamored of his own power, Garland has forgotten that basic principle.

The attorney general suffered his biggest blow when the court deflated his argument that Trump’s executive privilege was somehow nullified when his successor, Joe Biden, waived it and opened the door to the Mar-a-Lago raid.  Judge Cannon accused Garland of overstating the law.  She pointed to a Nixon era case in which the U.S. Supreme Court left open that very question.  Just this year, the high court suggested that the privilege does not vanish when a president departs office.  To allow a subsequent president to “eviscerate the executive privilege” of his predecessor would render that privilege meaningless.

On Garland’s authority, his “taint team” did not segregate any executive privileged material.  This was a critical mistake.  The AG assumed he was right about the law, but Judge Cannon stated that he could be —and appears to be— quite wrong.  Regardless, it is a question that will have to be resolved through litigation.

Immediately, Judge Cannon found herself the target of despicable personal attacks from the liberal media and pundits.  MSNBC host Joy Reid launched her typical screed.  It’s not worth repeating because it was all too predictable and obtuse.  Her network’s resident racist, Elie Mystal, spewed his usual vapid bile accusing Cannon of “obstruction” and being “corrupt.”

Mystal is the same guy —a lawyer, mind you— who denounced the U.S. Constitution as “trash.”  He said that white people who support the Second Amendment “care about using their guns on black people and getting aways with it.”  His previous racist rant against Georgia Senate candidate Hershel Walker set a new record for vileness, replete with the N-word.  Mystal once bragged on air about his “whiteness free” life during the pandemic.

Law Professor Jonathan Turley has a revealing column on all of this.  You can find it on his website, here.  It’s guaranteed to turn your stomach.  Turley also skewers Harvard Professor Laurence Tribe, who was once a highly respected legal mind.  But that mind has been lost to a terminal case of Trump Derangement Syndrome.  Tribe likened Judge Cannon’s special master order to the infamous Dred Scott decision upholding slavery.

In this article:featured, Merrick Garland