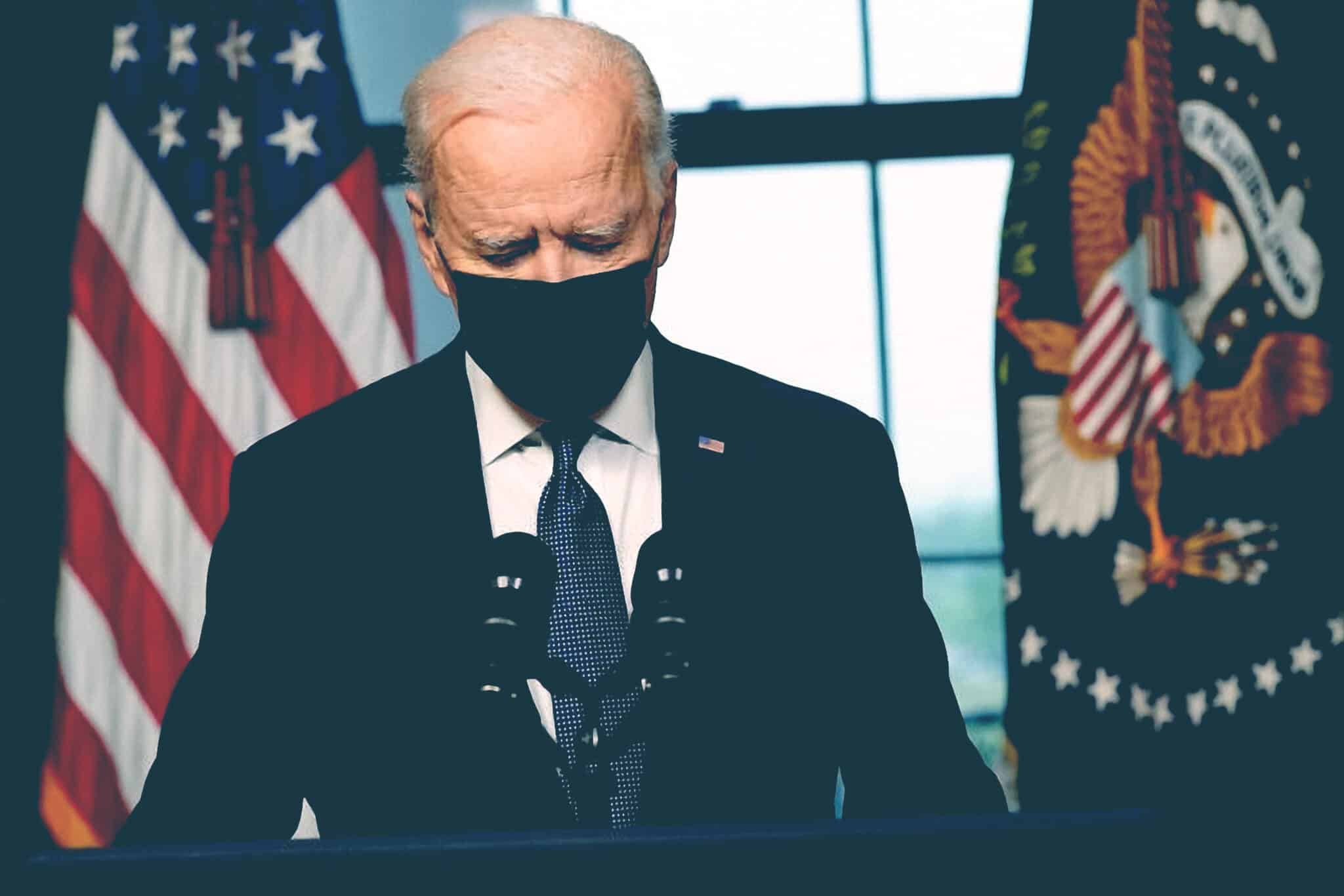 By now, most Americans have come to realized –albeit belatedly– that their president is utterly incompetent.  Suffering from an acute case of buyer’s remorse, most voters now regret putting a doddering buffoon in the Oval Office.  Close to 60% disapprove of Joe Biden’s job performance, while a scant 40% approve.  Some polls have him at 38%…37%…and dropping like the Hindenburg, fast and burning.

In the course of one short year, clueless Joe has managed to mangle just about everything…leaving the U.S. with record inflation, soaring gas prices, spiraling crime, the border crisis, supply shortages, the Afghanistan debacle, the pandemic surge, and his embarrassing failure to pass his $5 trillion dollar social entitlement lollapalooza, even though his own party controls both houses of congress.  Joe Biden is the definition of obtuse and inept.  Every week —every day— brings us a new and breathtaking experience in “Biden stooge-craft.”

A prime example of Joe Biden’s debilitating incompetence occurred when his aides trotted him out recently for what they thought was a well-choreographed tele-conference with the nation’s governors.  All Joe had to do was listen and nod as state leaders expressed their concerns about the COVID-19 pandemic.  Instead, Joe wandered off the reservation and said, “There is no federal solution.”  You could almost hear the heads thumping in unison on desks at the White House.  His handlers should have known better.  They sent him out there without a script in a teleprompter.  So, Joe actually had to think with that brain of his –which is a near impossibility.

No federal solution?  But wait.  When Biden was running for president he boasted that he had a solution.  He repeatedly vowed that he would “shutdown the virus.”  Did he do it?  No.  Nearly one year after he took office, the country has hit an all-time high of daily COVID cases.  Yet, on the campaign trail, he insisted he had a plan –a magical solution.  But now he admits there is no plan…and no solution.

It turns out, Biden never had a plan.  He just made it up.  He said it because it sounded good.  He figured it would help him get elected.  And that’s the problem with slimy politicians like Biden.  They’ll say anything to get elected.  They don’t care about the people they’re supposed to serve.  They only care about themselves –their thirst for power and prestige.  To get elected, they’ll make promises they know they can’t possibly fulfill.  And when they fail, people get angry and resentful at being lied to.  Their fury is reflected in the polls.  Biden’s numbers have tanked because his presidency is a spectacular dumpster fire.  It’s a 5-alarm blaze raging out of control.  There’s no putting it out.  It’ll burn for the next three agonizing years until his term mercifully ends.

Biden also recently claimed that his federal vaccine mandate is legal –this from a guy who got kicked out of law school.  No, Joe, it’s not legal… until the U.S. Supreme Court says it’s legal.  The justices have taken up several combined cases.  I suspect the high court will rule soon that Biden’s mandate forcing businesses to require workers to get vaccinated is an unconstitutional abuse of power.  Rebuked but not chastened, Biden will then claim that his federal solution was bollixed by those nasty conservatives on the Supreme Court.  It’s all their fault.  It’s Trump’s fault.  You know it’s going to happen.  Because Joe Biden is full of phony excuses to cover-up his own incompetence.  As Holman Jenkins pointed out in The Wall Street Journal, the only person who’s better at vacuous excuse-making is Hunter Biden.  Must be a family competition.  They’re both vying for the biggest nitwit in the Biden clan.

Every time Joe fails, he’s always ready with an excuse.  He recently said that if he’d known about the winter surge of COVID cases, he’d have made testing more available.  That’s a lie, of course.  Biden was warned last Spring.  At the time, health officials told him that millions of tests were needed.  Biden ignored the warning.  He was warned again in the Fall, but he rejected a proposal for 730 million “free rapid tests for the holidays.”  Now, he says no one saw it coming.  Really?  His science advisers Anthony Fauci and Rochelle Walensky (the head of the CDC) are both on record saying they saw Omicron coming and warned the White House.  That means that Biden knew it too.  But now he claims he didn’t know it.  Which is it?

Maybe Biden can’t remember because his brain is so addled he can’t recall what he had for breakfast, much less what his advisers and health officials were telling him over the last several months.  Same thing happened with Afghanistan.  Biden claimed that none of his military advisers told him to keep a couple thousand troops in the country to deter the Taliban.  Another blatant lie.  Top military brass testified before congress that they told Biden he should maintain some level of forces, but he chose to ignore them.  As a consequence, the Taliban overtook Kabul and a suicide bombing during our humiliating withdrawal murdered 13 U.S. service members, injured 18 Americans and killed at least 60 Afghans.  But Biden says he can’t remember being warned.  (Hey Joe…what color necktie are you wearing?  Don’t look down.  Try to remember!)

Biden can’t possibly recall all the insipid things he said about COVID and Trump during the presidential campaign that are now coming back to haunt him.  Famously, Joe said, “anyone who is responsible for that many deaths should not remain as president.”  At the time, there were 220,000 COVID deaths.  Since Biden took office, an additional 350,000 deaths have happened.  More Americans have died of COVID under Biden’s watch than under Trump.  So, Joe…by your own logic, you should not be president, right?   You should resign.  But don’t do it.  Because then we’d be stuck with Kamala Harris as president.  And she’s an even bigger dunce.  She makes you look like a member of MENSA.

How did we get here?  How did we end up with an incompetent fool like Joe Biden as president?  Well, none of the other Democrats that were running managed to gain enough traction.  Liz Warren and Bernie Sanders were just too crazy for most Democrat voters.  The others suffered from a variety of defects and failures.  But old Joe had a couple of things going for him.  First, he had enormous name identification because he’s been hanging around Washington since Grover Cleveland.  Second, he falsely sold himself as a moderate who would heal the nation after tumultuous Trump.

Then the pandemic hit.  It was perfect for Joe.  It allowed him to hide from voters.  Everyone knew that he was an epic disaster on the campaign trail, always sticking his foot in his mouth and saying ridiculous things.  Half the time he said stuff no one could understand.  He’d lose his train of thought, he struggled to put a subject with a predicate, and sometimes he had no idea where he was or what exactly he was doing.  Under normal circumstances, a guy like that would be wheeled off to the nearest nursing home.

But the pandemic saved Joe.  His aides exploited it as an excuse to banish him to the basement bunker in his Delaware home.  They’d occasionally prop him up in front of a teleprompter to read the words they’d written for him.  They controlled him like a puppet.  They knew he was a notorious gaffe-machine because…well… unintelligent people tend to say stupid stuff.  So, his puppeteer handlers were able to limit the kind of damage he would otherwise do to himself out on the campaign trial.

And I’ll be damned, old Joe got elected.  He promised to heal the nation, but almost immediately began dividing it.  He’s still at it.  He forgot that he was a moderate, or maybe that was always just a clever ruse.  He allowed the progressive “wing-nuts” in his party to commandeer control.  They’re in charge, not  Biden.

But Joe was also delusional.  He somehow convinced himself that he was the second coming of FDR.  He began promoting a far left-radical agenda.  There was just one little problem.  Roosevelt had a huge mandate.  Biden didn’t.  In the 2020 election, Democrats lost seats in the House, leaving them with a paper-thin majority.  The Senate is tied, 50-50.  That’s not a mandate.  That’s a stern warning that you’ll need to govern from the middle by seeking compromise and conciliation.  But Joe is out to lunch.  And breakfast and dinner.

The hard, uncomfortable truth is that Joe Biden is not very bright…and never has been.  Ask anyone is Washington.  As a senator for 36 years, Joe was always something of a joke in the halls of the nation’s capital.  When he served as Vice President, Obama’s White House used to make fun of him.  Whenever he spoke, people would roll their eyes.  Obama’s defense secretary Bob Gates once remarked that Biden has been wrong about every major foreign policy and national security issue over the past 4 decades.  He was right.  Obama himself once confided to a friend, “Don’t underestimate Joe’s ability to screw things up.”  He, too, was right.

So…that’s what we’ve got as our president.  A befuddled commander in chief who has predictably screwed up everything.

In this article:Joe Biden, Podcast, The Brief