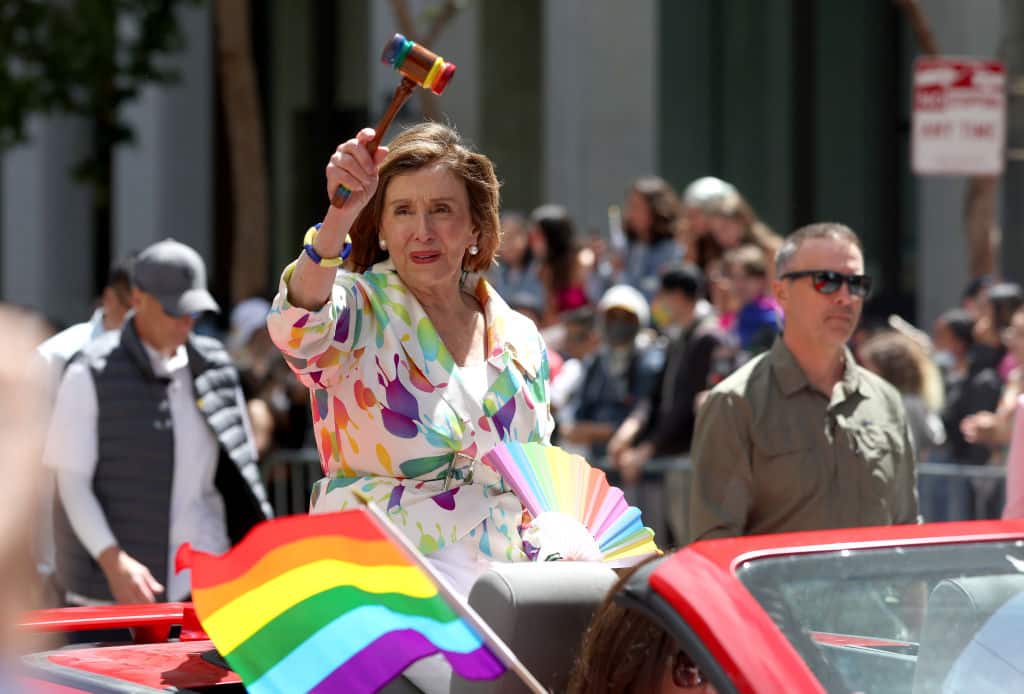 Nancy Pelosi is about as popular as a hernia.

Reviled for her “let them eat cake” arrogance, 60 percent of voters want the Speaker gone. Members of the progressive “Squad” snipe at her imperiousness. Other Democrats blame her for chronic legislative failures and a lack of leadership that has doomed the party’s control of the House come November.


But nobody puts Baby in a corner. Nancy pirouettes in front of cameras while clinging to power with a vice grip. Politico quipped that she rules with “an iron fist in a Gucci glove.” Which invites the question, who pays for all that Gucci? It ain’t cheap.

More to the point, how is it that Nancy Pelosi keeps getting richer while Americans are getting poorer? The answer is hiding in plain sight. It’s the perks of power when you’re the Speaker of the House. Exploiting it to accumulate personal wealth accompanies the job. It’s Nan’s version of “Dirty Dancing.”

Pelosi’s husband bought millions of dollars’ worth of stock in a computer chip company in advance of a congressional vote to boost the manufacturing of domestic semiconductors. That’s right…$52 billion of your taxpayer dollars is slated to support an industry that will invariably enrich Nancy and her hubby’s already burgeoning bank account.

It’s not the first time. Paul Pelosi, by virtue of his marriage to the most powerful person in Congress, has long had special access to confidential intelligence and what can only be described as “insider information” at the top. Over the last couple of years, he’s been ratcheting up a tsunami of stock trades in tech companies over which his wife has considerable influence. His latest ploy was Nvidia Corporation, which operates high-performance computing on a chips system.

The Pelosi duo have a net worth estimated at $135 million dollars and growing, although an exact figure is hard to ascertain. Isn’t it amazing how they have this uncanny knack of outperforming the stock market? Wait…maybe it’s not amazing at all. Perhaps they’ve simply mastered a scheme to profit from the reins of power. Sure looks like it. Maybe that’s how Pelosi became one of the richest members of Congress.

The Speaker sets the congressional agenda for federal policy that directly impacts both Wall Street and Big Tech. She holds regulatory influence over companies in which she and her husband invest. Legislation gets passed that can and does stimulate market forces.

All the while, it appears that Paul Pelosi has been trading on those forces with remarkable success –buying and selling Alphabet (aka Google), Microsoft, Apple, Amazon, Micron Technology, PayPal Holdings, Roblox, Salesforce.com, Slack Technologies, Tesla, VISA, American Express, Warner Bros. Discovery, and Disney.

Paul’s favorite bullish play is mechanism known as “call options.” It gives the buyer the right, but not the obligation, to buy stock at a specified price when the asset increases. Anyone who has knowledge about imminent policy or regulatory changes that may drive up values can make a killing financially. It’s a nifty trick, especially if you have a unique advantage.

Some members of Congress have expressed outrage. Pelosi infamously responded by gloating, “We are a free market economy.” Translated, it means screw you, I’ll do as I please. Under pressure, she later softened her rhetoric and suggested she might back a bill to restrict members and their spouses from trading stocks. It was all a charade because a funny thing occurred. The legislation got buried.

It’s one helluva coincidence. I wonder how that happened?

When you think about it, it’s no wonder that Nancy Pelosi is cashing in. She knows her days are numbered. She’s finished. She may as well pack up the gold monogramed boxes and vacant her lush Speaker’s office with the prime view. A reckoning awaits her and House Democrats in the upcoming midterms.

Americans are viscerally angry over inflation and the sinking economy, as well they should be. Pelosi played a pivotal role. She pushed Biden to declare war on America’s energy industry…driving up the cost of everything to a 40-year high. She rammed Joe’s extravagant spending plan through the House, which only made matters worse.
Throughout it all, Pelosi’s indifference and hubris has been breathtaking. There was Nan frolicking at a ritzy Italian seaside resort and strolling in the Mediterranean surf while her constituents back home struggled to buy groceries or pay for a few gallons of gas. Woe to the little folks. She insisted, “The American people have said they have a comfort level with their economic situation.” What? Who said that? No one I’ve ever talked with.

During her lavish Italian holiday, Pelosi visited Rome to curry favor with the Pope and have the Vatican elite bless her with Holy Communion during Mass in the VIP section at St. Peter’s Basilica. That was Pelosi’s punitive slap at the archbishop of San Francisco who had banned her from the sacrament because of her stand on abortion. Remember…nobody puts Baby in a corner.

Back home, Pelosi’s J6 kangaroo committee was given strict orders NOT to delve into Nancy’s own refusal to provide necessary security, even though she was warned that chaos and violence would almost surely occur. Did she want it to happen? Or was she callously uninterested?

Then there was her melodramatic response to the Supreme Court’s abortion decision. She stood before the lapdog legacy media and recited a poem. Really. The same poem she read after January 6th. Maybe she’s angling for honorary membership in the American Poetry Society. Except it was an Israeli poem.

But my favorite Pelosi incident was the photo op where she’s seen shoving aside a GOP member’s young daughter. It spoke volumes about Nancy’s character. No one, not even a child, is allowed to invade her rarefied space. So, she elbowed the girl away. Scram, kid. Get lost!

Americans are fed up with what Pelosi has been dishing out. She’s the 82-year-old doyenne who has been leading House Democrats for nearly two decades. Her uber-woke left-wing policies have driven economic life into an abyss of despair. Her unfavourability rating is off the charts. If the polling data is correct, she’ll be vanquished after the mid-term elections. Good riddance.

Pelosi doesn’t give a damn about those who put her in office. She never has. A new study found that San Francisco is among the worst-run cities in the nation. It ranks 149 out of 150. But Nancy’s sumptuous home in the tony Pacific Heights rests well above the squalor and crime. She’s rarely stops by to visit the proletariat and hasn’t lifted a finger to help solve the rampant violence and blight. She’s too busy hobnobbing in Washington and running the country into the ground.

Or maybe she’s preoccupied with all those stock trades and expanding her immense wealth.

The mainstream media has paid no attention to Pelosi’s greed…in much the same way it has deliberately ignored the Biden family’s corruption. But all of that will change if Democrats lose control of Congress in just a few months.

But first and foremost, Republicans must put a halt to the Biden agenda of higher taxes and more spending that liberal Democrats want to force down the throats of hardworking Americans who are suffering as a consequence. Our energy spigots need to be turned back on. Those are common sense solutions.

Inflation has risen to a four-decade high of 9.1 percent. In June, energy prices rose 7.5 percent from the previous month. Gasoline costs 60 percent more than a year ago.

The food index continues to climb… making consumers pay far more at the grocery store to feed themselves and their families. People can no longer afford everyday necessities. 84 percent of voters rate the economy as fair or poor. This is what Biden, Pelosi, and Democrats have wrought.

Even die-hard liberals are beginning to pronounce the demise of the policies they once championed. New York Magazine recently declared the “death of Democrats’ domestic ambitions,” calling it a “failure” and a “catastrophe.” They sowed the seeds of their own demise.

Voters of color are gravitating away from Democrats, according to a recent poll. The party that once proudly proclaimed that it stood for the interests of working Americans has succeeded only in heaping misery on low and middle-income workers. Their victims have increasingly turned against Democrats and are poised to express their fury at the ballot box in just four short months.

You know you’ve lost the political game when your own wife voices your obituary. In a truly head-scratching speech, Jill Biden recently bemoaned her husband’s conspicuous failures. Referring to his presidency in the past tense (after only one and a half years), her remarks were a collection of pathetic excuses. Joe, she said, would have succeeded if only he didn’t have to “address the problems of the moment.”

Seriously…what a moronic thing to say. It’s like a surgeon complaining, “I could have been a great golfer, if only I didn’t have to operate so much.”

If nothing else, Jill has proven to be Joe’s intellectual equal.

Joining me now to talk about it is Dave Bahnsen, founder and Managing Partner of The Bahnsen Group and author of “There’s No Free Lunch: 250 Economic Truths.”

In this article:featured, Nancy Pelosi, Podcast