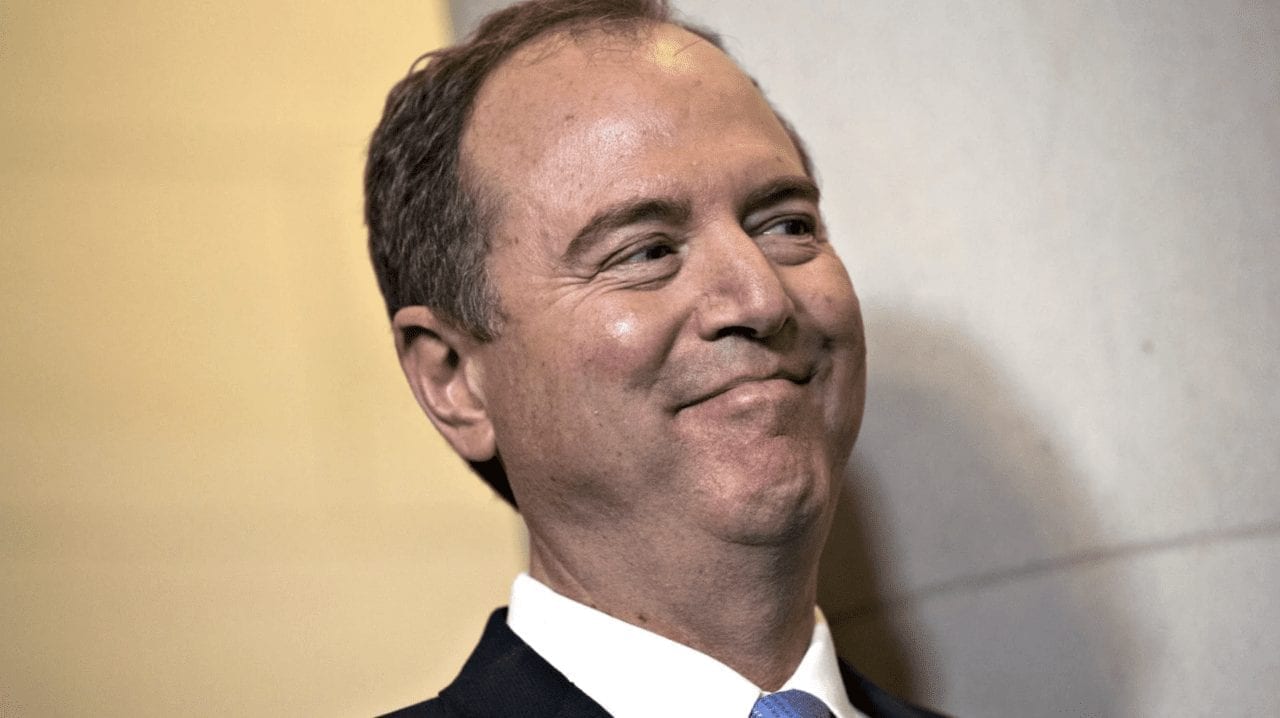 When the House Democrat isn’t peddling lies or weaving schemes to damage or defame political adversaries, he’s whining or crying about some invented injustice he’s suffered. Schiff is like a petulant child who wallows in his own self-induced victimhood. When he isn’t bellyaching, he’s bullying someone. Schiff is the kind of guy who gives cowards a bad name.

Bear in mind that “Shifty” has never accomplished anything constructive in his life. He knows only destruction. He’s perfected the art of dirty and corrupt politics. He’s a master at sleaze. His dishonesty is legendary in Washington.

For years, Schiff pushed the phony Steele Dossier…insisting that it was credible and corroborated. It wasn’t. He repeatedly claimed there was clear evidence of Trump-Russia collusion. There wasn’t. He said he had secret proof that Trump conspired with the Kremlin. He didn’t. He promised that there was no FISA abuse by the FBI. There was. These are just a few of Schiff’s greatest hits.

But during the first impeachment of Trump, Schiff really distinguished himself as a consummate sneak. He helped recruit and exploit a so-called “whistleblower,” who was no whistleblower at all under the law. Yet, he falsely denied that he or his committee had any prior contact. His lie earned him “Four Pinocchio’s” from The Washington Post. Then, in front of congress, he conjured up his own imaginary version of Trump’s phone call with the President of Ukraine to frame Trump for a crime that never happened.

I could go on and on. You’d need a calculator to keep track of Schiff’s deceit. So, it came as no surprise the other day when Schiff did it again. He threw an apoplectic fit when he learned that Trump’s Justice Department secretly obtained his phone records during a leak investigation. Except Schiff conveniently left out the part about how he had done the exact same thing to others. His feigned outrage and sanctimony was nothing more than rank hypocrisy. It was classic Adam Schiff.

There’s always a perverse irony when a perpetrator becomes the victim. It’s like a burglar who gets robbed. It makes you want to cheer, right? Or laugh. I was doing both as I watched Adam Schiff throw a tantrum when he learned that Trump’s DOJ had collected the congressman’s phone call records 3 years ago as federal prosecutors were trying to track down government leaks to reporters of classified information involving sensitive national security matters.

There was Schiff on television crying like a baby about how Trump had used the DOJ as a “cudgel against his political opponents”…and howling that it was –quote—“a blatant attack on our democracy.” This was hardly the case. The DOJ had presented probable cause to a grand jury that then considered the matter and issued lawful subpoenas. It was logical, after all, to examine Schiff as the source of the leaks, given his prodigious track record of politically motivated leaks aimed at harming his adversaries, especially Donald Trump, his chief nemesis.

But what was so laughable about Schiff’s conniption fit…was that he had done the exact same thing to others. And yet, he left that part out. Oh, gee…what a surprise! The insufferably self-righteous Schiff never bothered to mention that he secretly subpoenaed the phone records of a fellow congressman on his own committee, the House Intelligence Committee. Schiff also covertly seized the phone call records of Trump attorneys Rudy Giuliani and Jay Sekulow, attorney Victoria Toensing, journalist John Solomon, Fox News host Sean Hannity, and others.
Schiff secured the records from a telecommunications provider, just as the DOJ had done. The only difference is that the DOJ was trying to track down crimes committed. Schiff, on the other hand, was simply snooping on political opponents… or, as The Wall Street Journal called it, “abusing surveillance powers for drive-by-smears of Republicans and a free press.”

All of this happened during the first Trump impeachment debacle, presided over by Adam Schiff. He was doing what he always does: trying to dig up dirt by hook or by crook. Schiff then compounded his malevolent scheme by publishing the call records and some telephone numbers of those he had targeted. All the while, he refused to turn over any of his own electronic communications with the impeachment press and the so-called “whistleblower.”
What’s truly amazing is how compliant and clueless and stupid the mainstream media was as Schiff was throwing his temper tantrum the other day. No one in the media said to him: “But wait, didn’t you do the same thing? Didn’t you secretly collect people’s phone records without notice to them? Didn’t you trample on the Fourth Amendment rights of citizens and abuse your authority in another one of your witch hunts?”

Of course, the media didn’t ask! Why? Several reasons come to mind. The first is obvious. A lot of journalists are too dumb and don’t remember what Schiff did, even though it was only a scant three years ago. Amnesia seems to be contagious in the press corp. The second reason is that the progressive media is hopelessly biased. They refuse to challenge a liberal Democrat over suspected wrongdoing or glaring hypocrisy, especially when the matter vilifies the great “Demon” Donald Trump. There is no balance or fairness or objectivity in American newsrooms. There is only a shameless double standard that constitutes media malpractice on steroids.
There is one group that decided to challenge what Adam Schiff had done. The watchdog organization Judicial Watch filed a lawsuit seeking access to Schiff’s secretive subpoenas…to determine whether he had abused the power of his office. Naturally, Schiff fought to keep them sealed despite his repeated commitments to transparency.

In this article:Adam Schiff, hypocrisy, news3