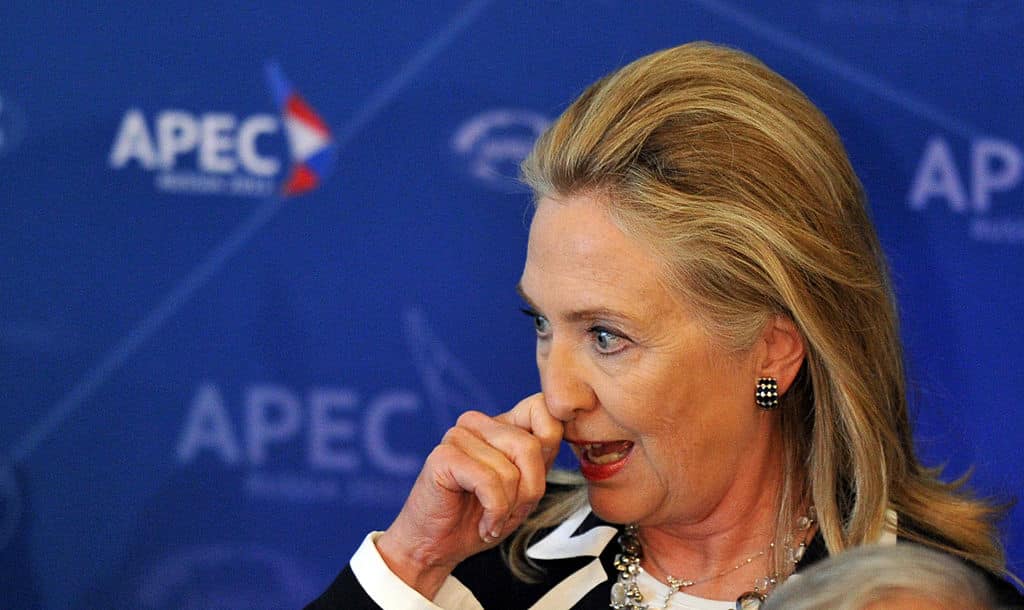 They were all corrupt.  Hillary Clinton and her cadre of lawyers and lackeys.  James Comey and his parasitic puppets.  Bob Mueller and his team of unscrupulous partisan hacks.  The odious Glenn Simpson and his smear merchants at Fusion GPS.  And, of course, the obnoxious media stooges who obsessed over Trump-Russia collusion without a shred of credible evidence.  They broke every rule in the book.  Sewer rats have more ethics.

That, in sum, is what we’ve learned from the federal trial of Michael Sussmann, the morally challenged attorney who knowingly peddled phony information to the FBI, CIA, and the press to frame Donald Trump both before and after the 2016 presidential election.

It was all a hoax invented by Hillary personally, funded by her campaign, and disseminated on her orders by her sycophants to the malevolent media to destroy her opponent and boost her chances of winning the White House.  The scam also had the added benefit, as declassified CIA documents show, of distracting from Clinton’s own damning email scandal.  Thanks to Comey’s abuse of power, she escaped criminal prosecution for that.  Feeling emboldened, she manufactured a new scandal to defame Trump.

The contemptible mainstream media served as witting accessories to the fraudulent conspiracy.  Blinded by their unabashed scorn for Trump, they were all too willing to run asinine stories of Kremlin collusion without bothering to verify or corroborate any of it.  Evidence?  Facts?  Proof?  Forget about it.  That stuff is for chumps.  When it comes to sliming Trump, there are no journalistic rules.

Frankly, I don’t care whether Sussmann is convicted or not.  He’s dead-bang guilty.  Any average moron can see that.  But with a Washington DC jury chocked-full of Clinton supporters and donors, I don’t hold out much hope that justice will prevail.  A perversion of justice is more likely.

What matters is that special counsel John Durham has finally unraveled the cascade of lies and misfeasance that enabled the greatest mass delusion and dirty trick ever perpetrated in American politics.  It has been laid bare for all to see during Sussmann’s trial.  Which is precisely why ABC, CBS, NBC, and MSNBC have refused to cover any of it.

The same news organizations that were addicted to spreading collusion lies have chosen to embargo the truth.  Reporting on it now would be a public admission that they were reckless and wrong.  God forbid that journalists would ever offer a sincere mea culpa or apology.

I’m reluctant to say that I told you so, but I did.  I published a book four years ago titled, “The Russia Hoax: The Illicit Scheme To Clear Hillary Clinton And Frame Donald Trump.”  I penned a follow-up book a year later called “Witch Hunt.”  In those books I presented irrefutable evidence that the collusion story was nothing more than fiction conjured up by Hillary Clinton and her confederates.  The anti-Trump “dossier” was pure fabrication.  The Alfa Bank “back channel communication” between Trump and Putin was clever con.

As expected, I was roundly mocked, ridiculed, and demeaned by members of the media who declared in unison that I was wrong.  They insisted that Trump was a covert Russian asset.  They maintained the charade even after Mueller –despite his best efforts to find otherwise– concluded that there was no collusion conspiracy between Trump and Russia.

Maybe The New York Times and The Washington Post just didn’t want to return their Pulitzer Prizes for getting the story wrong.  Perhaps the broadcast and cable networks didn’t want to see their ratings crater even further by admitting they were incompetent fools.  Whatever the reason, their absence of self-examination and failure to address their own epic blunders is reprehensible.  Yet, it is not unexpected.

Any responsible news organization would view the Sussmann trial as an opportunity to right the wrong.  By reporting honestly for a change, journalists could resuscitate the respect they squandered.  But that would require the kind of moral compass that the media conspicuously lacks.  So, the blackout will continue.

The most stunning revelation from the trial so far came from Hillary’s campaign manager, Robby Mook.  His testimony proved the truth of Durham’s overall case –that Clinton personally approved the plot to leak the bogus Alfa Bank collusion story to the media.  It landed in the courtroom like a bombshell.

Amazingly, it was the defense that called Mook to the witness stand, not the prosecution.  It was a daffy move.  Experienced defense attorneys know that it is invariably unwise to call a witness unless you absolutely need to do so in establishing a major point.  Why?  Because the risk of that witness imploding on cross-examination is always severe.

Here, Mook served only a minor or marginal purpose for the defense.  He testified that the Clinton Campaign did not direct Sussmann to pass along the Alfa Bank material to the FBI.  But the campaign’s intent is irrelevant.  The defendant’s intent is what matters under the law.  Sussmann billed the campaign for the FBI visit and lied about who he was representing.  He put his lie in writing by stating in an email that he wasn’t there on behalf of a client, only himself.

Was it a “material” lie, as the law demands?  Absolutely.  FBI agents testified that had they known that Sussmann was acting on behalf of Hillary, they would have recognized the purported evidence for what it was –a political smear engineered by Trump’s opponent.

The recipient of the lie, former FBI general counsel James Baker, also took the stand and dropped his own bombshell.  He testified that he was 100 percent certain that Sussmann informed him he was handing over the Alfa Bank data as a concerned citizen but not “on behalf of a client or company.”   Baker further stated that if he had known that the accused was doing Hillary’s bidding, he probably would have rejected the meeting.

The trial has also exposed a torrent of lies and deceptions by others.  For example, top FBI officials actively concealed from their own field agents that it was Sussmann who had peddled the phony collusion documents.  Instead, the agents assigned to investigate them were told that they came from the “Department of Justice,” giving the case the imprimatur of greater credibility than it deserved.  It was completely untrue and hobbled the bureau’s ability to debunk the data.

We have also learned that the FBI eventually concluded as early as January of 2017 –just as the new president was about to take office– that the so-called “back channel communication” evidence was a hoax.  The agency had already determined that the Clinton-funded “dossier” was a hoax.  Did Comey come clean and tell the truth to Trump, congress, and the American public?  No.  He hid all of the exculpatory evidence that the new president was the innocent victim of a monumental dirty trick.

Instead, Comey, Andrew McCabe, Peter Strzok and other bad actors at the FBI exploited the counterfeit evidence as a pretext to escalate its investigation of Trump to drive him from office.  When Comey was fired, he stole government documents for the admitted purposed of leaking them to the media to trigger the appointment of a special counsel who just happened to be his longtime friend and former colleague, Robert Mueller.

A nearly two-year long investigation followed that dragged Trump through the media mud, damaged the nation politically, and did enormous harm to his presidency.  It was Hillary’s lie that started all of it.  And it constituted an obvious crime; to wit, conspiracy to defraud the government.

Will she ever be held accountable under the law?  No.  She has managed to escape prosecution just as she beat the legal system in her email scandal.  She is a privileged member of the protected class.  Hillary is above the law.

The words “equal justice under law” are meaningless when the scales of justice are tipped with partisan weight.  Lady Justice is not blind.  She peeks beneath the blindfold.  If she spots a Democrat, all is forgiven.  If she spies a Republican, she hurls the book at him.

Joining me now is Alina Habba, a lawyer for Donald Trump who has been inside the federal courtroom for the entirety of the trial.  Alina, thanks for joining “The Brief” podcast.