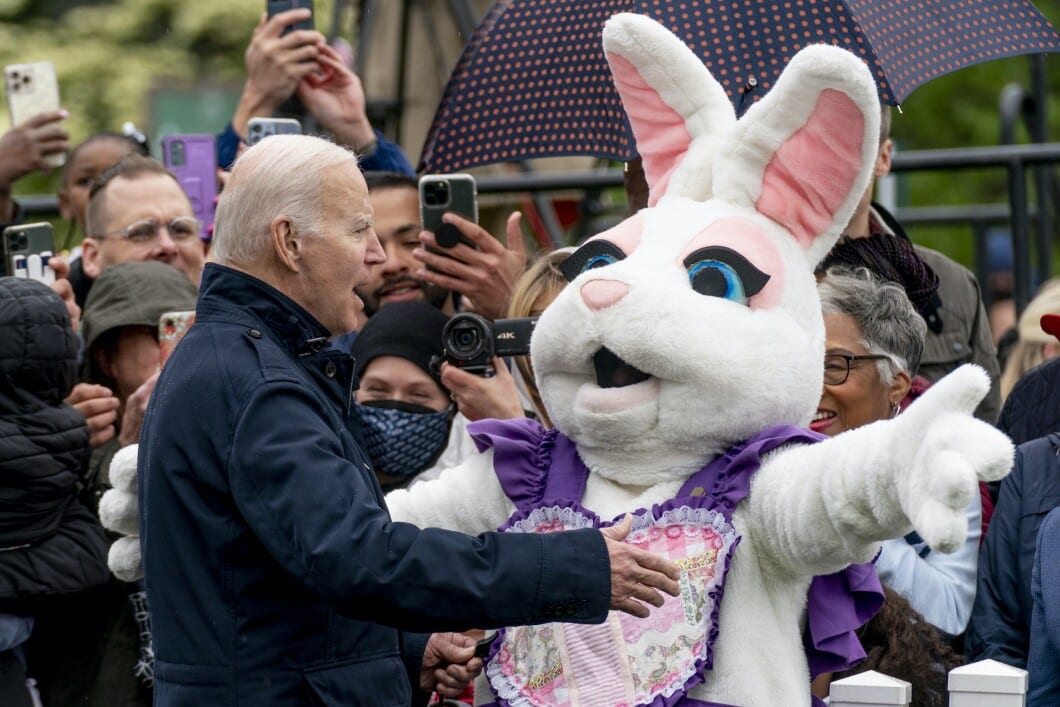 Who’s the bigger fraud?  The Easter Bunny or Joe and Hunter Biden?

There’s symmetry in that question of choice.

Are we to believe that a rabbit delivers gifts to millions of children in a single night?  Or should we believe that the Bidens did nothing wrong by raking in millions of dollars from foreign interests by selling access and influence?

The question came to me as I watched Hunter Biden frolicking with kiddies on the lawn of the White House last Sunday.  This is the same guy who is under criminal investigation for suspected fraud, money laundering, and a panoply of foreign lobbying crimes.  Maybe bribery and racketeering are in the mix.  They should be.

Forget that Hunter also had a penchant for recording his sexual dalliances with prostitutes and storing the images on his infamous laptop.  That’s kids’ stuff compared to international corruption.

Yet, there was the First Son yucking it up at the White House without a care in the world.  Why was he even there?  He probably thought there was cash hidden in the plastic Easter eggs.  Anything for a buck.

Nearby was his doddering dad being escorted around the grounds by a giant Easter Bunny —a Biden “handler” in costume— and shielding Joe from reporters with inconvenient questions.  The rabbit was telling him where to go and what to do.  Maybe the unidentified furry beast is really running the country.

The whole thing was both surreal and laughable.

But it typified the fantasy world in which the Bidens reside.  Laws and rules don’t apply to them.  They can sell out America and jeopardize national security without an ounce of conscience.  Their regret is getting caught.  Obviously.  If only Hunter hadn’t forgotten that pesky laptop he dropped off at a repair shop.

Never mind…“pops” will fix it.  He’s done such a great job fixing our economy, keeping inflation in check and energy prices low, solving the border crisis, and tamping down the rampant crime that’s terrorizing cities.  His handling of Afghanistan was the stuff of genius.  The war in Ukraine?  Give Joe the Nobel Peace Prize, even though much of what he bungled on his trip abroad had to be retracted.

But I digress.  At what point will the Biden Crime Family face a reckoning?  When will their corruption and lies be fully exposed?  It could (and should) happen in two ways.

A Delaware grand jury can issue a multiple count indictment of Hunter Biden that would likely implicate the president in their lucrative enrichment schemes.  In the alternative, congress could flip control in the November elections and launch the kind of serious investigation that should have happened long ago.

Except that Democrats, the media, and Big Tech ran a mafia-like protection racket that covered up the crimes that were surely committed.  Their “Russian disinformation” lie was a bigger fraud than the Easter Bunny.

Try as they may, covering for Biden is no longer a plausible strategy for the press.  They recognize that his hold on power resembles a sick oyster at low tide.

You’ve gotta know that your presidency is a dumpster fire when one of your biggest suck-up boosters in the media reverses course and begins trashing you.

CNN, a dedicated Biden cheerleader, dropped its pompoms on Sunday just as Joe was shuffling around the back lawn of the White House with a huge Easter Bunny leading him to and fro by the nose.

On the show “Inside Politics,” the network bemoaned Biden’s abysmal approval rating of a scant 33% and how he’s hemorrhaging support among every demographic in the book.  Democrats are fleeing like rats on a sinking ship.

Brought to reality kicking and screaming, CNN is now admitting the obvious.  Americans en masse have turned against Biden because they belatedly realize that his policies are all wrong and his presidency has the indelible imprint of incompetence written all over it.

CNN host Abby Phillips said Joe had managed to create “an environment of overall discontent.”  No kidding?  Molly Ball, political correspondent for Time Magazine, was more direct when she said,  “People correctly perceive that he’s not in control of the situation.  And I think ever since that Afghanistan last summer, people have had —voters overall— have not had a sense of leadership from the White House, have not had a sense that there’s a president in control, who is strong and consistent and knows what he’s doing and can project a consistent message from one day or the next.”

Wow.  There’s a lot to unpack there.  Biden’s not in control.  No sense of leadership.  No strong or consistent message.  In other words, chaos reigns because the supposed leader of the free world has no idea what he’s doing.

Whoever is running the show at the White House —maybe it’s the Easter Bunny because it ain’t Joe— is either oblivious to what ails America, hasn’t a clue how to fix it, or is so dedicated to toxic liberal policies that economic destruction is simply the cost of achieving the great socialist-progressive agenda.

The Left reminds me of the doctor who happily pronounces that the surgery was a success, although the patient died.  That’s Joe Biden’s presidency in a nutshell.  Indeed, it’s nuts.

But Americans are also coming to realize that the Biden name is synonymous with corruption.  Here, again, the mainstream media is late to the game.

News organizations are finally admitting what they have long denied.  That is, there’s compelling proof that Hunter Biden leveraged his father’s power as vice president to pocket millions of dollars from foreign nations with whom dear old dad had significant influence.

And there is persuasive evidence that Joe was in on the illicit (and illegal) schemes and stood to profit by them personally.

Very few people have a solid handle on the incriminating evidence.  But Peter Schweizer is one of them…and, fortunately, he’s my guest.  Peter has been at the forefront of uncovering political corruption at the highest levels of our government.  He’s the author of several bestselling books, including Profiles in Corruption and Clinton Cash.

His latest bestseller is entitled Red Handed: How American Elites get Rich Helping China Win.  He is the president of the Government Accountability Institute which has just come out with a new report exposing China’s efforts to undermine and sabotage America thru financial transactions that allowed them to gain access to powerful U.S. politicians.