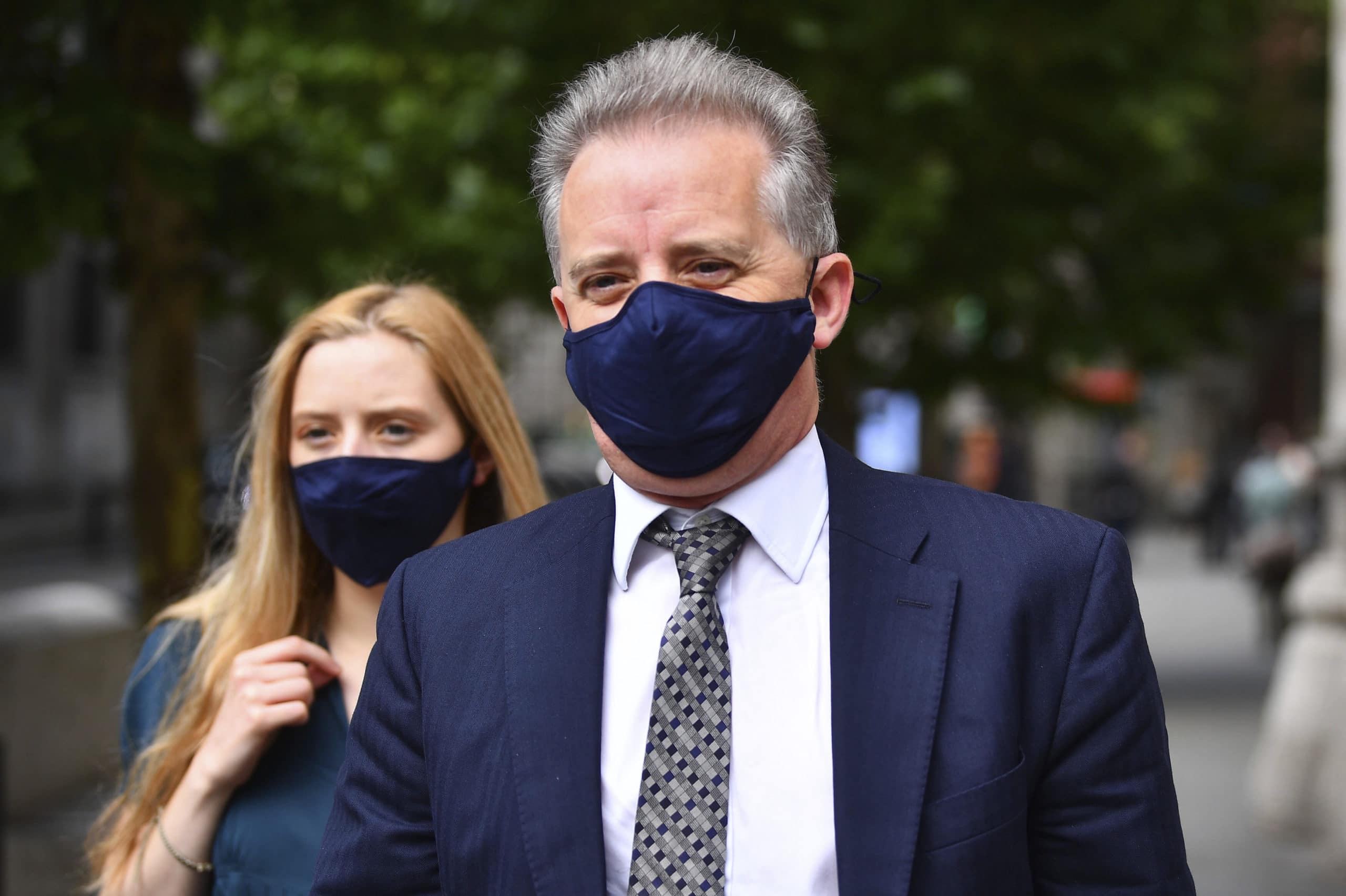 He is not some mysterious Russian agent operating in the bowels of the Kremlin.  Danchenko is a Ukrainian-born resident of the United States who worked as a senior research analyst for the Washington D.C. liberal think tank, Brookings Institution.

When the dossier was invented in 2016, the president of Brookings was Strobe Talbott, a long-time friend and ally of Hillary Clinton.  Her campaign provided the cash for the phony document that was composed by ex-British spy Christopher Steele.

Talbott helped fuel the Trump-Russia collusion narrative.  But it was Danchenko who supplied Steele with most of the false stories contained in the dossier.

Danchenko’s identity, concealed by the FBI for three and a half years, was uncovered by clever cyber sleuths and thereafter confirmed by his attorney.

Beginning a mere four days after Donald Trump was inaugurated in January of 2017, FBI agents interviewed Danchenko during three successive sessions.  A summary of their findings –but with Danchenko’s name redacted– was recently declassified and released to the public.

The stunning 56-page report revealed how the accusations supplied by Danchenko that Trump colluded with Moscow were false and fictive.  Yet, the bureau kept this information carefully hidden.

Instead of revealing the truth and ending the investigation of the president, then-FBI Director James Comey escalated the case.  Once fired, he stole government documents and leaked them to the media for the purpose of triggering the 22-month long probe by Special Counsel Robert Mueller that eventually concluded that there was no evidence of a collusion conspiracy.

Make no mistake –it was the dossier that propelled much of the FBI’s collusion witch-hunt, as well as the warrants to spy on Trump campaign associate, Carter Page.  Other scant evidence was discarded by the FBI early on, such as campaign adviser George Papadopoulos hearing a rumor that Russians had obtained Clinton’s deleted emails.

Although Papadopoulos copped a plea to lying to the FBI, disseminating rumors is not a crime.  He had no direct contact with Russian operatives.  With the help of an undercover agent, the bureau realized that Papadopoulos was innocent and that this avenue of collusion was a dead end.

The newly declassified FBI report that explains how Danchenko served as Steele’s “sub-source” for nearly all of the dossier’s absurd fables is a cautionary example of how conjecture and lies based on multiple hearsays can take on a life of their own and hold a presidency hostage.

In March of 2016, Steele recruited and paid Danchenko to dig up dirt on Trump.  The Brookings researcher/analyst seemed desperate for money.  He told FBI agents that he “felt like he had to report something back to Steele” to justify the monthly salary he was receiving (page 12 of FBI report).  So, he trafficked in gossip to keep the paychecks coming.  Facts and truth were irrelevant.

In telephone calls and voice communications through Skype, Danchenko spoke with a handful of people he knew in Russia and others he described as “random associates” (p38).  Some were barroom buddies with whom he would “drink heavily” (p17).

They traded fairy tales about Trump.  It was nothing more than prattle and drivel –a guy told a guy who told me that someone connected to Trump might have done thus-and-such.  You get the picture. It wasn’t reliable intelligence; it was scandalous junk derived from “speculation and open secrets” (p30).

Danchenko insisted that he told Steele that his information was just “rumor and speculation and that he had not been able to confirm the story” (p39).  According to the Justice Department Inspector General, Danchenko said that Steele “misstated or exaggerated” the hearsay that he furnished.

For example, Danchenko claimed he spoke with staff at the Ritz Carlton in Moscow about the salacious story of Trump engaging in sexual improprieties inside a hotel room.  The staff “laughed it off ” (p39).  But Steele didn’t care; he was determined to use it against Trump.

He included the sordid tale in his dossier and then peddled it to both the FBI and the media in order to destroy Trump whom he admittedly loathed.  Steele confided in Justice Department official Bruce Ohr that he was “desperate” to stop Trump.

Of course, the liberal mainstream media was more than happy to appropriate the Steele-Danchenko garbage.  The New York Times, The Washington Post, CNN, and MSNBC all treated it as gospel without ever attempting to confirm the accuracy or veracity of any of the ludicrous allegations.  It should have been obvious to any responsible journalist that the far-fetched assertions were cobbled together by someone with a motive to smear Trump.

Anyone with half a brain who actually read the dossier when BuzzFeed published it on January 10, 2017, knew immediately that it was a work of fiction. It read like a horribly written spy novel.  It was truly laughable.  In my 2018 book, The Russia Hoax, I wondered how anyone with an ounce of intelligence could take it seriously:

“On its face, the dossier was a preposterous collection of rumors, innuendos, supposition, and wild speculation.  At least one part of it contained demonstrably false statements.  In its entirety, the set of documents incorporated not a bit of direct evidence.  Instead, it was based solely on multiple hearsay accounts from inherently unreliable sources in Russia who were, notably, experts in lies and disinformation.”

It should come as no surprise that Danchenko worked for the Brookings Institution (a published paper by him is still listed on its website) at the very time that Strobe Talbott was president.  Talbott, a dedicated Clinton loyalist, penned a frenzied column stating with certainty, “We already know that the Kremlin helped put Trump into the White House and played him for a sucker… Trump has been colluding with a hostile Russia throughout his presidency.”

I haven’t seen Talbott’s retraction or apology since the Mueller report came out, nor do I expect one.  He has a lot to answer for, including his own contacts with Steele.

It just so happens that Talbott’s brother-in-law is Clinton sycophant, Cody Shearer, who created what became known as the “second dossier.”  Remarkably, it echoed several of the identical fantastic allegations as the original Steele-Danchenko dossier –equally bereft of evidence or corroboration.

In my latest book, Witch Hunt, I explained how “some of Shearer’s own accusations against Trump were transcribed into the last few Steele memos, which were then passed on to the FBI.”   Hence, Clinton’s campaign didn’t just commission the dossier, her allies contributed to its contents.

The FBI knew all of this but continued to insist that Steele was reliable and the dossier was credible, even in the face of incontrovertible evidence to the contrary.  The bureau scrupulously guarded their secret knowing full well that disclosure would ruin the public’s trust in the FBI.

Attorney General William Barr and Director of National Intelligence John Ratcliffe are to be commended for having the courage to declassify the documents that have exposed the FBI’s malevolence and malfeasance.

Did top officials at the FBI commit crimes?  In my judgment, yes.  Laws were perverted or ignored.  The law enforcers became the lawbreakers.

When powerful forces in government abuse their positions of trust to subvert the legal process, democracy is threatened.  Reverence to the rule of law is lost.

It is now up to U.S. Attorney John Durham to hold corrupt people accountable with criminal indictments.