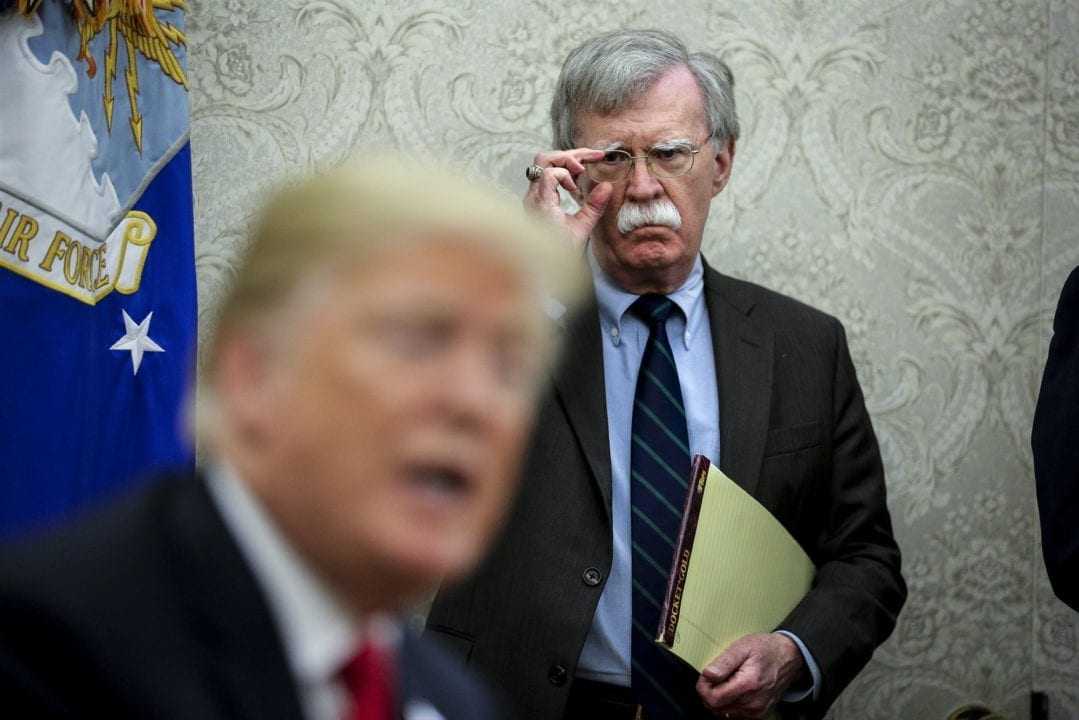 [otw_shortcode_dropcap label=”A” background_color_class=”otw-no-background” size=”large” border_color_class=”otw-no-border-color”][/otw_shortcode_dropcap]fter sitting on their hands and listening to arguments for a week in President Trump’s impeachment trial, senators were finally allowed to pose their own questions Wednesday. It proved to be illuminating.

As is often the case, the first question was the most penetrating and important one. It got to the heart of the Democrats’ principal accusation regarding why they contend the president should be removed from office.

Democrats claim that when Trump asked Ukrainian President Volodymyr Zelensky to look into what Trump called troubling actions by former Vice President Joe Biden and his son Hunter, Trump was seeking a political advantage against a prospective opponent in the November presidential election. This, argue Democrats, was an impeachable “abuse of power,” and was the basis of the first article of impeachment approved by House Democrats in December.

Trump’s legal team has countered that the president had every right to ask Ukraine to examine and produce any evidence of a potentially corrupt act by a U.S. public official. The act to be examined was Joe Biden’s demand that Ukraine fire a prosecutor who was allegedly investigating Burisma, a Ukrainian natural gas company that employed his son.

[otw_shortcode_dropcap label=”B” background_color_class=”otw-no-background” size=”large” border_color_class=”otw-no-border-color”][/otw_shortcode_dropcap]y any reasonable and objective standard, Hunter Biden’s employment was highly suspicious and unusual. At a time when his father was serving as vice president and in charge of Ukraine policy for the Obama-Biden administration, Hunter Biden was being paid $83,000 a month to sit on the natural gas company’s board – despite having absolutely no experience in the energy sector and no experience in Ukrainian affairs.

The question put to Trump’s defense team by Republican Sens. Susan Collins of Maine, Lisa Murkowski of Alaska and Mitt Romney of Utah was: “If President Trump had more than one motive for his alleged conduct such as the pursuit of personal political advantage, rooting out corruption and the promotion of national interest, how should the Senate consider more than one motive in its assessment of Article 1?”

More than any other question, this one needed answering. Setting aside whether Trump was genuinely motivated by electoral gain, Deputy White House Counsel Patrick Philbin explained that presidents often make decisions that have multiple or “mixed motives.” This is an obvious truth.

Nearly all presidential actions involve some ancillary political calculation. Sometimes there is a dual or overlapping purpose.

As I argued in my last column, nearly all presidential actions involve some ancillary political calculation. Sometimes there is a dual or overlapping purpose.

History is replete with examples of how presidents, including Abraham Lincoln, have rendered decisions that benefited themselves and the nation simultaneously. This does not mean their judgments constituted an abuse of power. If it were otherwise, nearly all presidents would be impeached and evicted from office.

Want Gregg’s Articles Delivered To Your Inbox for FREE?  Sign up for the Jarrett Newsletter HERE

Philbin reasoned that all elected officials are mindful of how their conduct will affect their political standing because “there’s always some personal interest in the electoral outcome of policy decisions.”

In asking President Zelensky to look into then-Vice President Biden’s threat to withhold $1 billion in U.S. aid from Ukraine unless the prosecutor allegedly investigating Burisma was fired, Philbin explained that Trump had a legitimate public purpose.

“If there were a motive that was of public interest, but also some personal interest, it follows more clearly that it cannot possibly be the basis for an impeachable offense,” Philbin said. He added that “lots of their own witnesses from the State Department said that, on its face, it (Joe Biden’s actions) appeared to be a conflict of interest.”

Constitutional law professor Alan Dershowitz was even more animated in defense of the multiple motives argument when he spoke in President Trump’s defense at the impeachment trial.

Dershowitz again cited the example of President Lincoln, who encouraged General William T. Sherman to grant his men leave from the battlefield to return to Indiana to cast votes for Lincoln’s reelection in 1864.

Did Lincoln use the power of his office for personal and/or political gain? Of course, he did. Was it an impeachable “abuse of power?” No, said Dershowitz, “because the president believed it was in the national interest. He believed that his own reelection was essential to victory in the Civil War.”

The retired Harvard Law School professor added: “Everybody has mixed motives, and for there to be a constitutional impeachment based on mixed motives would permit almost any president to be impeached. How many presidents have made foreign policy decisions after checking with their political advisers and their pollsters? If you’re just acting in the national interest, why do you need pollsters? Why do you need political advisers? Just do what’s best for the country.”

Dershowitz tied his constitutional analysis together by stating: “For it to be impeachable, you would have to discern that he [the president] made a decision solely on the basis of, as the House managers have put it, a corrupt motive and it cannot be a corrupt motive if you have a mixed-motive that partially involves the national interest and partially involves electoral interests.”

Only an unlawful act by the president would be impeachable, Dershowitz concluded. Yet, House managers have not alleged a crime or violation of the law in their articles of impeachment.

For the sake of argument, let’s assume – as The New York Times has reported – that Bolton’s upcoming book recounts how Trump mentioned in a conversation that he “wanted” to withhold $391 million in U.S. security assistance from Ukraine unless that nation investigated the Bidens. Let’s further assume that Trump’s motive was, in part, political.

This still does not meet the proper impeachable standard for several reasons.

First, can anyone truly argue that the behavior of the Bidens was not suspicious enough to merit an investigation? Democrats’ own witnesses said it posed a serious conflict of interest. Evidence produced by Republicans during the Trump impeachment trial has raised the specter of influence peddling and self-enrichment.

Video clips were played of the media asking persistent questions regarding the Bidens and airing stories suggestive of corruption. This demonstrates that President Trump had a legitimate basis to ask Ukraine to scrutinize what happened. It was a matter of public interest.

Even accepting that the leaked story about the Bolton book is accurate, a president wanting to do something and actually doing it are two very different concepts. Lots of presidents want to do things they never choose to do.

After delaying U.S. military aid to Ukraine, Trump released the funds to the nation without any strings attached. No “quid pro quo” ever came to fruition. The idea – if there ever was one – was discarded.

Importantly, President Zelensky and his foreign minister both stated they were never pressured to investigate anything and had no idea that American aid was temporarily halted until well after the fact.

President Trump may have talked with Bolton about conditioning aid to Ukraine on an investigation of the Bidens, but such action never occurred. To remove Trump from office for merely discussing something with a senior aide is to turn Congress into the “thought police” where contemplation is tantamount to an impeachable offense.

Finally, there’s the matter of Bolton’s suspected breach of confidential communications with Trump and the disclosure of classified material. Presidents have the right to obtain confidential advice and to engage in private deliberations without the intrusion of the legislative branch.

The principle of executive privilege has been recognized and respected since President George Washington invoked it more than two centuries ago. It is a paramount privilege when matters of national security are at stake. Trump’s conversation with his national security adviser is most likely covered by the privilege.

It is deeply disturbing that Bolton would have the temerity to write a book that would breach this privilege and profit from it financially.

Three days before The New York Times reported its story based on (you guessed it) anonymous sources, a senior director at the National Security Council sent a letter to Bolton’s lawyer. The letter warned that the manuscript submitted to the council contains “significant amounts of classified information,” including some “at the TOP SECRET level.”

Under federal law, and perhaps as well as under the nondisclosure agreement that Bolton signed as a condition to his employment, publication of the existing manuscript could subject him to criminal charges.

The Times reports that Bolton has already circulated his book manuscript to “close associates” – something Bolton denies doing. If the newspaper report is correct and those individuals did not have the highest security clearance, the law may already have been broken.

Whoever leaked to the Times could also be prosecuted if the information conveyed was deemed classified. Regardless of the security issues, senators are still not entitled to pierce the veil of executive privilege unless Trump waives the privilege or the federal courts determine that it does not apply.

Is it really worth a protracted legal battle for the Senate to gain access to a purported presidential discussion of a “quid pro quo” that, in the end, never actually happened? To pose the question is to answer it.

In this article:Democrats, impeachment, Senate, Trial