[otw_shortcode_dropcap label=”C” font=”Ultra” background_color_class=”otw-no-background” size=”large” border_color_class=”otw-no-border-color”][/otw_shortcode_dropcap]BS News obtained the infamous list being discussed the past week with names of Obama Administration Officials who were “in” on the request to “unmask” former Trump administration national security adviser Michael Flynn. Low and behold, the guy who wants to be the next president of the United States, former Vice President Joe Biden, was on the list.

“Biden’s office made its request to see Flynn’s identity on January 12, 2017 – the same day that Washington Post columnist David Ignatius broke the news of Flynn’s calls with then-Russian Ambassador Sergey Kislyak” according to the National Review.

Included on the NSA list was a paragraph before the names and dates which stated: “below is a list of recipients who may have received Lt. Gen Flynn’s identity in response to a request processed between 8 November 2016 and 31 January 2017 to unmask an identity that had been generically referred to in an NSA foreign intelligence report.” 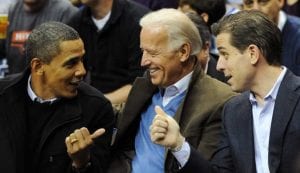 As explained by the National Review, “American citizens whose communications are incidentally picked up in national-security surveillance are protected by law. But they can be unmasked by a select number of U.S. officials, and it is illegal to leak unmasked information or use it for political gain.”

Let’s discuss political gain, shall we? “Comey revealed in 2018 that he ‘sent’ FBI agents to interview Flynn in the White House on January 24, 2017” not long after Biden’s request to unmask Flynn. Furthermore, Comey also added it was “something I probably wouldn’t have done or maybe gotten away with in a more organized administration” revealed the National Review.

The article also reminds readers that handwritten FBI notes were recently released which clearly demonstrate FBI agents had questioned if “the goal of Flynn’s White House interview was to get him to lie, so we can prosecute him or get him fired.”

As for the guy claiming transparency and honesty while running for President? In an interview earlier this week with ABC’s George Stephanopoulos, Biden tripped all over his words saying he knew nothing about the investigation into Michael Flynn until Stephanopoulos reminded him that he was in the Oval Office meeting on January 5, 2017; a meeting where Flynn was discussed. Nice catch, George. Biden revised his answer, saying he knew the FBI “asked for an investigation, but that’s all I know about it.”

Except, that likely wasn’t the case considering the NSA document shows Obama’s Chief of Staff Denis McDonough requested Flynn’s unmasking on the day of the Oval Office meeting, Jan 5, and only 7 days later, Vice President Biden made the same request.