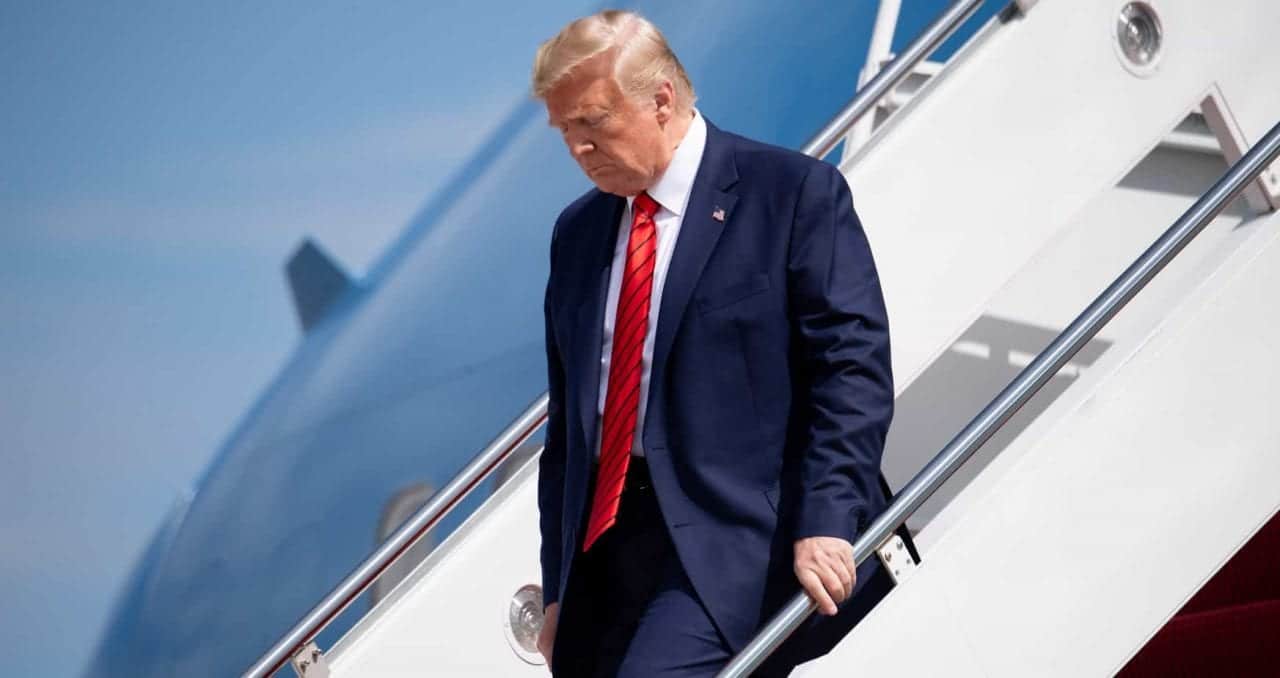 US President Donald Trump disembarks after arriving on Air Force One at Joint Base Andrews in Maryland, September 26, 2019, after returning from New York. (Photo by SAUL LOEB / AFP) (Photo credit should read SAUL LOEB/AFP/Getty Images)

It is ludicrous to argue that President Trump’s telephone conversation with Ukraine President Volodymyr Zelensky was an impeachable offense.

Trump had every right to ask Ukraine to cooperate or assist in an official Department of Justice investigation into the origins of the Russia “collusion” hoax. His request was pursuant to an official probe being conducted by U.S. Attorney John Durham and initiated by Attorney General William Barr. In fact, Ukraine is required to comply under a binding treaty with the U.S.

The Treaty on Mutual Legal Assistance in Criminal Matters obligates Ukraine to provide, upon request by the U.S., assistance “in connection with the investigation, prosecution, and prevention of offenses, and in proceedings related to criminal matters.” This treaty was negotiated by then-president Bill Clinton more than 20 years ago and approved by the U.S. Senate. Among other things, Ukraine agreed to furnish “documents, records, the taking of testimony or statements of persons” relevant to any U.S. investigation.

Unfortunately, Kiev has not always abided by this treaty. Beset by rampant corruption, past Ukrainian administrations have been less than cooperative with the U.S. Indeed, there is significant evidence that Ukraine actively meddled in the 2016 election by providing dirt on the Trump campaign at the behest of a Democratic National Committee subcontractor who wanted to help elect Hillary Clinton. This is detailed in my new book, “Witch Hunt.”

With the election of a new Ukrainian president who vowed to end the rampant corruption, President Trump saw an opportunity to reset relations and obtain assistance in the Durham investigation. As pointed out by columnist Marc Thiessen, the DOJ has disclosed that it is “exploring the extent to which a number of countries, including Ukraine, played a role in the counterintelligence investigation directed at the campaign during the 2016 election.”

Despite media and Democrat misrepresentations of the conversation, the “do us a favor” remark by Trump was a request that Ukraine cooperate in the Durham probe. The president phrased it in a friendly manner to enlist Zelensky’s assistance, even though it is incumbent on Ukraine to do so under the terms of the treaty. It is not at all unusual for the U.S. government or its president to ask for help from a foreign nation in extant investigations conducted by the DOJ.

Trump’s reference to former Vice President Joe Biden and the suspicious activities of his son, Hunter Biden, comes later in the conversation:

It is indisputable that Biden is seen and heard on videotape bragging that he engineered the firing of Ukrainian prosecutor, Viktor Shokin, by threatening to withhold $1 billion in U.S. aid to Ukraine. Shokin is on record telling the Washington Post that he was sacked because his investigators were “on his (Hunter Biden’s) tail” in a case of suspected corruption involving $3 million in fees that found their way into the pocket of the VP’s son. Joe Biden has dismissed this as nonsense and the mainstream media have accepted his explanation as gospel.  However, documents newly uncovered by The Hill’s John Solomon belie Biden’s claim. These records appear to show that that Shokin’s account, not Biden’s, was true.

Joe Biden’s boast about his “quid pro quo” with Ukraine is compelling evidence that he may have used his public office to confer a benefit ($1 billion) in exchange for something of value –shutting down an investigation to help his son. This is where the Foreign Corrupt Practices Act comes into play, as well as other federal felony statutes such as bribery, extortion, and honest services fraud. The Justice Department would be justified in investigating Biden to determine whether he took any official action involving taxpayer money as Vice President to benefit his son.

Once again, President Trump had every right to ask Zelensky to assist the U.S. in any existing or prospective investigation. Biden doesn’t enjoy immunity simply because he is running in the Democratic primary for president. There is no amnesty for a prospective political opponent. Lest we forget, the Obama administration launched an investigation into the nominee of the opposing party during a presidential campaign.

Nowhere in the Trump-Zelensky telephone call was there a threat (like Biden’s), pressure, condition, or demand by Trump.  Impeachment hysteria, if not insanity, has obscured the facts.  Sen. Richard Blumenthal, D-Conn., said of Trump’s conversation with his counterpart, “What this shows is repeated, concerted, premeditated, criminal conduct.”  Columnist Michael Gerson wrote in the Washington Post, “For the first time in American history, the president has pleaded guilty to an impeachable offense.” This is effectively what happened…,” he added.

It is easy to dismiss such obtuse pronouncements as partisan bloviating. In reality, it represents a fundamental misunderstanding of the law, international agreements, and federal investigations. The president’s words were neither a crime nor an impeachable offense. Article II, Section 3 of the Constitution imposes a duty on the president to “take care that the laws be faithfully executed.” If he is aware of potential evidence of lawlessness that resides in the hands of a foreign government, he is duty-bound to ask that such evidence be produced.

What is driving the impeachment blather is an overwhelming desire by Democrats and the complicit media to destroy Trump’s presidency, undo the 2016 election, and evict him from office. Talk of impeaching Trump began before he was ever sworn in or unpacked his luggage at the White House.  Every act by the president has been branded “an impeachable offense.”

At every turn and with every perceived slight, howls of impeachment have reverberated through the halls of Congress and in liberal newsrooms across America. Trump’s demise is always just around the corner, they insist. Except it isn’t. Not if you consider those pesky things called facts.

And so, here we are again. Trump-Ukraine “collusion” is just the latest incantation in the never-ending “witch hunt.”