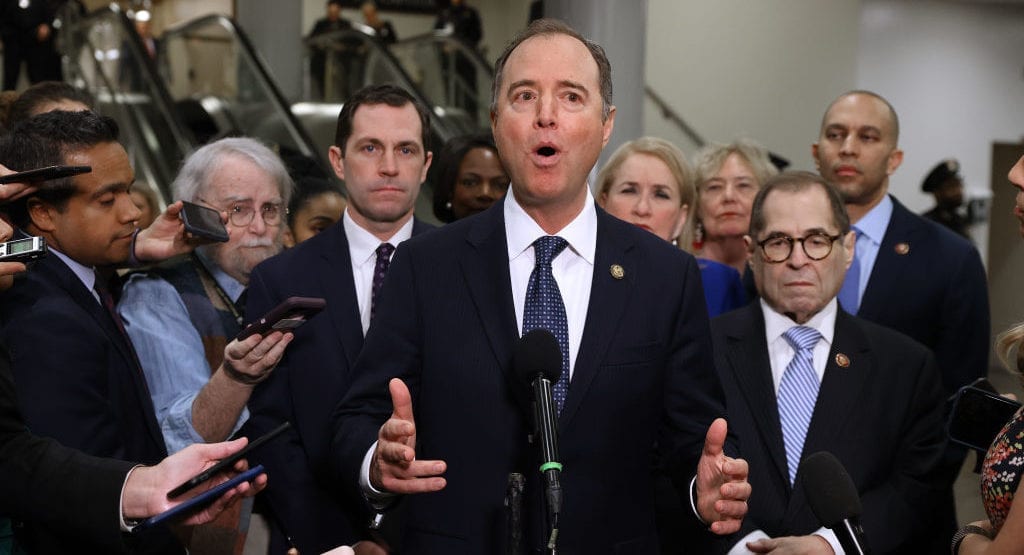 If Rep. Adam Schiff was around in 1864, he would have orchestrated the impeachment of President Abraham Lincoln.

House Intelligence Committee Chairman Schiff, D-Calif., and his confederate impeachment managers demand that President Trump be removed from office because the president did something that might advantage him politically in the upcoming election. This, they claim was an impeachable “abuse of power.”

On the floor of the Senate, Schiff exclaimed that Trump wanted “to cheat” in the November presidential election by asking Ukraine to investigate former Vice President Joe Biden and his son over potential corruption. Democrats are the only ones who are buying this thin gruel.

History tells us that American presidents often take actions that advantage themselves politically. Indeed, one can argue that nearly all presidential decisions have some ancillary political calculation. It is the inherent nature of politics.

I recently read historian Doris Kearns Goodwin’s brilliant book “Team of Rivals.” In Chapter 24, she recounts how Republican President Lincoln utilized the powers of his office to ensure that Union soldiers in the field, who vigorously supported Lincoln’s reelection in 1864, were given the chance to cast their ballots for him. Most states permitted absentee ballots for troops. But the crucial state of Indiana did not.

So Lincoln wrote General William T. Sherman encouraging him to grant his men leave to return briefly to the northern state of Indiana. “Any thing you can safely do to let … soldiers, or any part of them, go home and vote at the State election, will be greatly in point,” wrote the president. Despite the risk that this might compromise his troop strength, Sherman consented.

Secretary of War Edwin Stanton saw to it that furloughs were granted. Goodwin quotes the Civil War journalist Charles Anderson Dana who wrote: “All the power and influence of the War Department … was employed to secure the re-election of Mr. Lincoln” (pages 663-4). At Lincoln’s direction, the government also provided Navy boats to gather ballots from sailors.

The Democrats are the ones – not Trump – who have been motivated by personal political gain.

Did Lincoln use the power of his office for personal political gain? Of course. Was it an “abuse of power?” No.

While Lincoln was the clear beneficiary of the military votes, there were other compelling reasons that justified his actions. He felt that soldiers should not be disenfranchised because of their service. However, his larger goal was to preserve the union and end slavery.

Lincoln’s opponent in the election, Gen. George McClellan, was nominated by Democrats on a platform that promised to end the Civil War immediately and tolerate slavery in the South.

It is folly to criticize Lincoln’s motives, although Schiff surely would. Under Schiff’s contorted impeachment standard, anything that “benefits the President’s personal political interests” is an impeachable offense, regardless of whether another legitimate or lawful purpose may exist.

History is replete with examples of how presidents have rendered decisions that benefit themselves and the nation simultaneously.

In an excellent opinion column in The New York Times, Constitutional Law Professor Josh Blackman reiterated the Lincoln example and also cited the actions of President Lyndon Johnson in 1967 when he maneuvered to appoint Thurgood Marshall as the first African-American justice to the U.S. Supreme Court. This advanced civil rights enormously, while also burnishing Johnson’s political standing.

As Blackman explained: “Politicians routinely promote their understanding of the general welfare, while, in the back of their minds, considering how those actions will affect their popularity. There is nothing corrupt about acting based on such competing and overlapping concerns. Yet the impeachment trial threatens to transform this well-understood aspect of politics into an impeachable offense.”

Against this backdrop, let’s reexamine what President Trump actually said in his July 25 conversation with Ukrainian President Volodymyr Zelensky.

According to a transcript released by the White House, Trump stated: “The other thing … there’s a lot of talk about Biden’s son, that Biden stopped the prosecution and a lot of people want to find out about that so whatever you can do with the Attorney General would be great. Biden went around bragging that he stopped the prosecution so if you can look into it. … It sounds horrible to me.”

Zelensky responded that he was “knowledgeable about the situation” and vowed that a new prosecutor “will look into” it. He added that a renewed investigation of “the company” (Burisma), which paid Hunter Biden more than $1 million to sit on its board despite no real experience in energy, was important “to restore honesty.”

Yet Schiff ignores the concomitant or dual purpose supported by the record. Trump was reluctant to hand over nearly $400 million in American taxpayer funds to a country rife with corruption.

“Since taking office, President Trump has criticized Ukraine for corruption,” reported by The Wall Street Journal.

In the Zelensky conversation, Trump expressed concern that Joe Biden had bragged on camera of how he had engineered a financial quid pro quo that resulted in the firing of a Ukrainian prosecutor who has stated to news organizations, including The Washington Post, that he was investigating corruption at Burisma and Hunter Biden’s role.

Therefore, as president, it was appropriate for Trump to ask Ukraine to look into any potentially corrupt act by a high-ranking American public official involving Ukraine. Isn’t this something that we should know?

If it was Joe Biden’s intent to protect or benefit his son by threatening to withhold $1 billion in U.S. taxpayer money from Ukraine unless the prosecutor was fired, it might well constitute a violation of various corruption laws. Trump had every right to inquire.

Under the terms of a treaty that is two decades old, Ukraine is obligated to furnish the U.S. with such information. Biden does not enjoy immunity because he is now running for president.

Trump’s request was perfectly legal. The first article of impeachment does not allege a crime or violation of law. Instead, House Democrats assert that the president’s motivation was political –as if that is a novel concept. As history instructs, this is not uncommon in presidential decision-making and has never before served as the sole basis for impeachment.

History also informs us that the second article of impeachment is without merit. It accuses the president of obstruction of Congress because he resisted congressional subpoenas by invoking legally recognized privileges and immunities.

In Ron Chernow’s influential biography “Washington,” the author explains in Chapter 61 how our nation’s first president defied demands by members of the House to access confidential communications and deliberations involving a treaty of neutrality with Great Britain negotiated in 1794 by Supreme Court Chief Justice John Jay.

Washington eventually reached a compromise with the Senate, but the principle of executive privilege was firmly established and followed by subsequent presidents under the doctrine of separation of powers.

Nearly 200 years later, the U.S. Supreme Court stated that it is “patently unconstitutional” to penalize a person’s reliance on his legal rights. This would certainly apply to the president, as

Nadler said during the Clinton impeachment: “The use of a legal privilege is not illegal or impeachable by itself.” Yet now, as a House manager in the Trump impeachment, Nadler is arguing just the opposite.

Constitutional Law Professor Jonathan Turley warned the House Judiciary Committee during his Dec. 4 testimony that “basing impeachment on this obstruction theory would itself be an abuse of power … by Congress.” He was correct.

History will not be kind to House Speaker Nancy Pelosi of California, House Intelligence Committee Chairman Adam Schiff of California, and Nadler. Driven by an abiding hatred of

Trump, the tortured interpretation of the Constitution by these Democrats has diminished the exceptional power of impeachment. Their unconscionable quest to evict him from office will not hold up to scrutiny when the final chapters are written.

The Democrats are the ones – not Trump – who have been motivated by personal political gain.