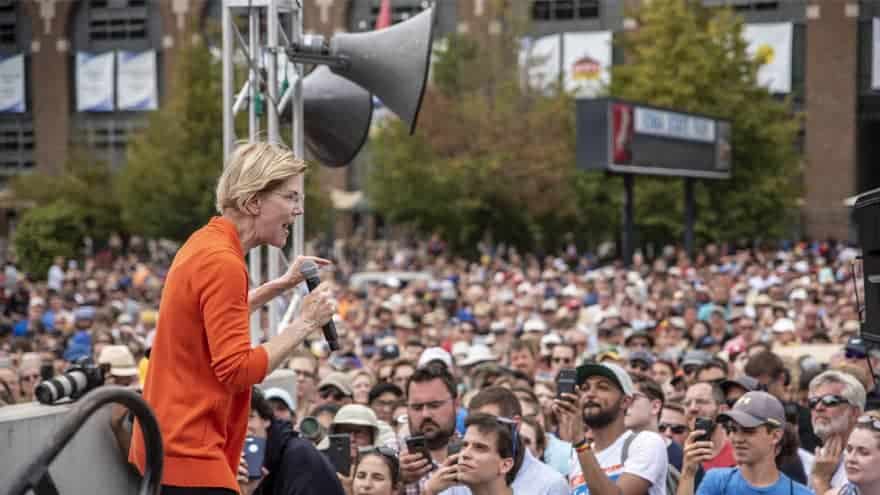 A new survey shows far-left Senator Elizabeth Warren in the lead in the pivotal primary state of Iowa; topping all other opponents by double-digits weeks before voters head to the polls.

“A new Iowa Starting Line-Change Research poll shows the senator opening up a commanding lead in the Iowa Caucus. Warren was the top pick of 28% of likely Iowa Caucus-goers in the poll, an 11-point lead over the nearest competitor. Joe Biden and Bernie Sanders were both tied for second with 17% each. Pete Buttigieg came in fourth at 13% and Kamala Harris has the backing of 8%,” reports Iowan political website Starting Line.

“Both Cory Booker and Beto O’Rourke garnered 3% of caucus-goers’ support, while Steve Bullock, Tulsi Gabbard, Amy Klobuchar and Tom Steyer got on the board at 2%. Julian Castro, Michael Bennet and Andrew Yang rounded out the field at 1%, while everyone else had less than that,” adds the website.

The latest survey from Economist / YouGov shows Biden at 21%, followed by Warren at 20% and Sanders at 16%.

“Biden, by and large, remains the frontrunner in most surveys, but Warren’s rise in the polls comes with the Vermont senator falling from second to third place,” reports The Hill.

The Sanders’ campaign is dismissing the poll; claiming the media has largely turned on Bernie since 2016.

“We’re sort of in the phase called the ‘Bernie write-off,’” senior adviser Jeff Weaver told reporters Monday. “There seems to be a direct correlation between the media coverage of the polls and Bernie Sanders’s standing in those polls.”

“Polls are one thing, but the energy that is on the ground is most important,” Nina Turner, one of the co-chairs of Sanders’s campaign, said.

“Gravis Marketing has released its first 2020 New Hampshire Democratic Primary poll and finds Sen. Bernie Sanders sitting atop the Democratic Primary field with 21% of the vote.  Former Vice President Joe Biden took second place with 15% of New Hampshire Democratic primary goers supporting him. Behind Sanders and Biden, Sen. Warren is at 12% respectfully followed by Mayor Buttigieg with 8%, Sen. Kamala Harris at 7%, Rep. Tulsi Gabbard at 5%, Andrew Yang and Tom Steyer each with 4%, and Rep. Julian Castro and former Rep. Beto O’Rourke at 2%,” reports the Polling Firm.