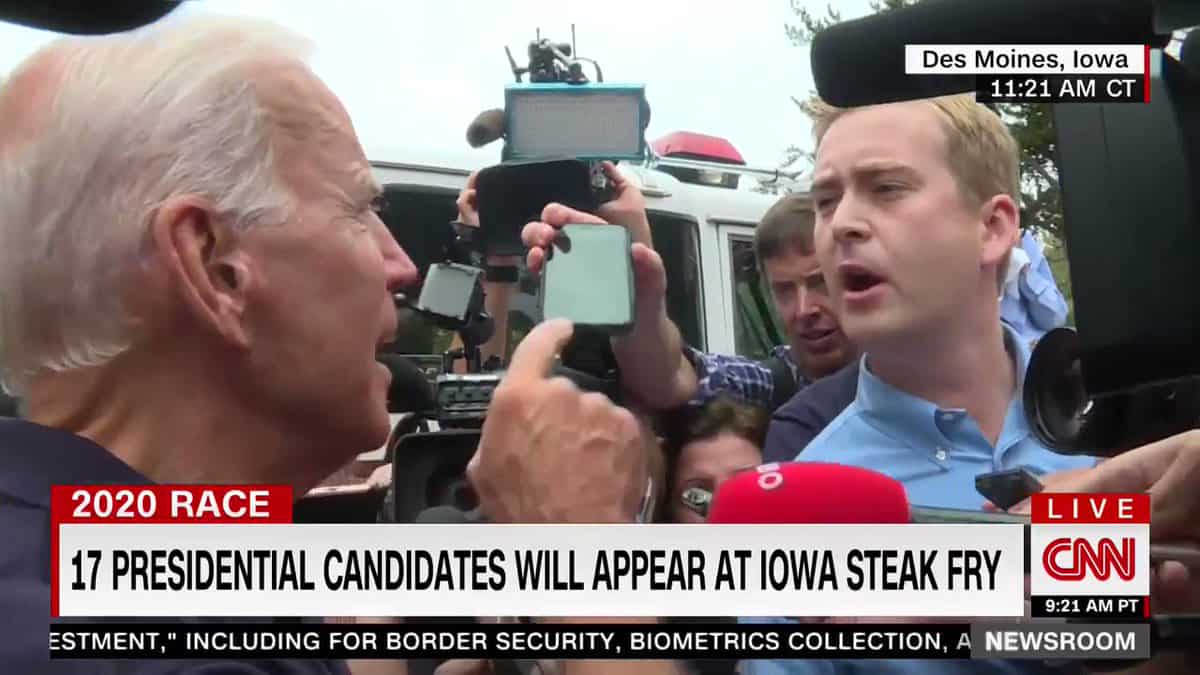 “Mr. Vice President, how many times have you ever spoken to your son about his overseas business dealings?” Doocy asked.

“I have never spoken to my son about his overseas business dealings,” Biden claimed. “And here’s what I know, I know Trump deserves to be investigated. He is violating every basic norm of a president. You should be asking him the question, why is he on the phone with a foreign leader trying to intimidate a foreign leader, if that’s what happened, that appears to be what happened, you should be looking at Trump.”

There are multiple problems with Biden’s reply. Firstly, Doocy’s question was based off Biden’s own admission that he used his power as Vice President to force the firing of a Ukrainian prosecutor who was investigating shady business dealings between Biden’s son, Hunter Biden, and a Ukrainian company, Burisma Holdings, that was employing him. The Hill reported in April that in 2018 “Biden couldn’t resist the temptation… to brag to an audience of foreign policy specialists about the time as vice president that he strong-armed Ukraine into firing its top prosecutor,” adding, “In his own words, with video cameras rolling, Biden described how he threatened Ukrainian President Petro Poroshenko in March 2016 that the Obama administration would pull $1 billion in U.S. loan guarantees, sending the former Soviet republic toward insolvency, if it didn’t immediately fire Prosecutor General Viktor Shokin.”

Another problem is that, despite Biden claiming he had “never spoken to my son about his overseas business dealings,” Biden did, in fact, discuss his overseas business dealings with his son Hunter. According to The New Yorker, “In December 2015, as Joe Biden prepared to return to Ukraine, his aides braced for renewed scrutiny of Hunter’s relationship with Burisma. Amos Hochstein, the Obama Administration’s special envoy for energy policy, raised the matter with Biden, but did not go so far as to recommend that Hunter leave the board. As Hunter recalled, his father discussed Burisma with him just once: “Dad said, ‘I hope you know what you are doing,’ and I said, ‘I do.’””

The Hill pointed out that  “there was one crucial piece of information that Biden must have known but didn’t mention to his audience: The prosecutor he got fired was leading a wide-ranging corruption probe into the natural gas firm Burisma Holdings that employed Biden’s younger son, Hunter, as a board member.”

In remarks to Breitbart News, investigative reporter and president of the Government Accountability Institute Peter Schweizer pointed out that “What’s interesting about this is that Hunter Biden has no background in Ukraine. He has no background in energy or natural gas or anything like that, but of course, his father, the vice president at the time, was the point person on U.S. policy towards Ukraine, and the money we’re talking about here is eye-popping. Hunter Biden was getting $83,000 a month from this Ukrainian energy company where he had no background.”

Schweizer continued, “So the immediate question becomes, he’s not selling his expertise — because he has none in this field — what is he getting paid for? That is the issue, and Ukrainian officials in the prosecutor’s office decided to investigate, and they started to investigate, at which point Joe Biden would later brag about getting the prosecutor fired, who has the head of that office, and Joe Biden said that he threatened to withdraw a billion dollars of our taxpayer money in aid to Ukraine unless they fired this prosecutor, so that’s what the issue revolves around.”