Violence? What violence? The former vice president and current presumptive Democratic nominee either has no television monitor in the bowels of his basement or his brain is so addled that he cannot process what the rest of us are seeing.

Biden persists in referring to the rioters as “peaceful protesters.” This is a delusional, if not deranged, interpretation of the nightly carnage on full display in cities like Portland, Seattle, Chicago, and elsewhere.

Biden’s prescription for what ails America during this epidemic of civil unrest and lawlessness is for the President of the United States to do nothing. That’s what a President Biden would do if elected come November –sit on his thumbs in chronic denial.

Trending
The Brief: Joe Biden is a Profile in Cowardice and Incompetence

President Trump will have none of it. With the backing of Attorney General William Barr, the president has sent federal law enforcement into several cities to quell the rampant violence that is doing untold harm to lives and livelihoods.

Reflexively, Biden opposes such assertive action to protect innocent citizens and local police who are often the targets of vicious attacks. He recently remarked, “There is no reason for the president to send federal troops into a city where people are demanding change peacefully and respectfully.”

“No reason”? “Peacefully and respectfully”? Maybe Biden’s perspective is guided exclusively by glancing out the window of his sumptuous Delaware estate. No problem here –nothing but stoic Secret Service agents guarding me with their guns.

Biden’s cloistered bubble bears no relationship to the reality of the out-of-control violence that has seized metropolitan areas where mayors and governors have barely lifted a finger to stop it.

In some cases, local leaders have egged on the demonstrations that have morphed into the desecration of public property, burning of buildings, vandalizing of storefronts, ransacking of businesses, and the often-indiscriminate assaults on both civilians and local law enforcement. 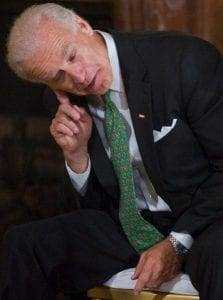 In Portland, the feckless and incompetent mayor, Ted Wheeler, has emboldened the angry mob, cheering them on. Violent anarchists have taken over the streets with riots that have raged for more than 50 days. The federal courthouse is under constant attack. The police union headquarters was torched. Chaos reigns as local businesses have sustained $23 million in loses.

On a nightly basis, Portland police are attacked with hammers, projectiles, flaming debris and explosives. Instead of stopping it, Wheeler –who is also the police commissioner– has encouraged it. The far-leftist mayor no longer governs the city, ANTIFA does. He has ceded control to the notoriously radical, loosely-knit group that employs intimidation, harassment, violence, and terror tactics. Its goal is to end freedom and liberty. Wheeler is all in.

On Thursday, he joined the protesters downtown where he proclaimed, “I am here tonight to stand with you.” Wheeler thanked them for opposing what he called President Trump’s “occupation” of the city by deploying federal agents. And then, in the blink of an eye, it turned ugly.

Like cannibals, the crowd decided to eat their own. Shouts turned to jeers, and heckles became boos. “You’re a f—ing fascist!” they yelled. It quickly escalated into a boisterous demand for Wheeler to resign. Bottles and other objects were hurled at him. The dazed and confused mayor suddenly retreated under the protection of his security detail that struggled with the agitators to whisk their charge to safety. Mayhem erupted and the mayor was tear-gassed along with the mob.

Who was to blame? Trump, of course. “This is flat-out urban warfare and it’s being brought on this country by the president,” griped Wheeler afterward. Right. The criminal mob that commandeered the city is blameless. The president who sought to quell the escalating violence –because the mayor refused to do so– is somehow the villain.

Naturally, there is some semblance of justice here. Or maybe its karma. The mob labeled Wheeler, “Tear gas Ted,” and then the mayor himself was tear-gassed. “How does it feel, Teddy?” screamed one demonstrator, followed by an ominous warning, “Your house is next!”

In places that were once tranquil, bricks and bats have supplanted free speech. Anarchy has replaced law and order. Bullets and bloodshed have rendered cities unsafe and neighborhood uninhabitable.

Is it any wonder that President Trump has had enough? To his credit, he has decided to take action where governors and mayors have either failed or refused to do so.

Pay no attention whatsoever to commentators and liberal politicians who howl that the use of federal law enforcement to stop the violence in cities is unlawful and unconstitutional. They are wrong.

One of the principle duties of any president is to “take care that the laws be faithfully executed.” In times of violence, the federal government guarantees that it will protect states. This Article II, Section 3, Constitutional power is reinforced by the Insurrection Act passed by congress in 1807 and amended several times thereafter. It specifically authorizes the president to deploy federal military forces in states to suppress civil disorder, insurrection, and rebellion.

Importantly, the Insurrection Act is an exception to the Posse Comitatus Act of 1878, which limits the use of military force domestically. Hence, the president is permitted to act unilaterally to restore and maintain public order in states, to protect federal property, and to preserve the rights of the general citizenry. This can be accomplished with or without the request or consent of a governor or mayor.

Beginning with Thomas Jefferson, twelve presidents in our history have invoked the Insurrection Act to stop rioting and civil unrest in cities, prevent threatened violence, and to enforce federal laws such as desegregation and civil rights. On five of those occasions, presidents have acted without a request from state authorities.

Those who have condemned the commander-in-chief’s use of federal force (both actual and threatened) have conveniently ignored that he has not mobilized military units, although he is legally entitled to do so. This is an important distinction. There are no military troops in Portland or elsewhere. Not yet.

Instead, the president has chosen a less intrusive and more prudent course by dispatching federal law enforcement officials from various agencies, including the Department of Homeland Security (DHS), the Drug Enforcement Administration (DEA), and the Bureau of Alcohol, Tobacco, Firearms and Explosives (ATF). The FBI and the Department of Justice are also involved.

Demagogic complaints that federal agents have operated undercover and in unmarked vehicles are overwrought and hysterical. Inasmuch as local uniformed police and their marked cruisers have been repeatedly attacked, it is both wise and effective for federal officials to function less conspicuously. This is standard practice.

It is no coincidence that all the violence is concentrated in cities run by liberal mayors. They willingly embrace the progressive ideology of the anarchist-led crowds and enable the resulting violence. Many Democrat governors are complicit. They have neither the courage nor political conviction to stand up to the mob.

And neither does Joe Biden. In his oblivious world, all is fine and the “protestors are peaceful.” Even if he were convinced otherwise, he wouldn’t do anything about it. Biden is too “woke.” And weak.