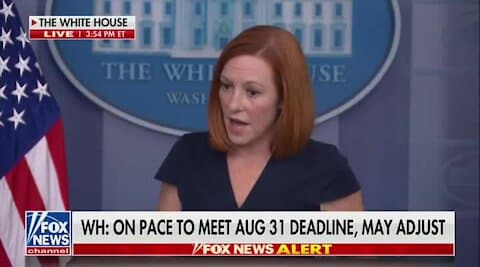 During Tuesday’s press briefing, White House Press Secretary Jen Psaki said that President Biden’s disastrous withdrawal from Afghanistan was “a success,” despite reports that some of the Afghans who have been evacuated have ties to terrorist organizations.

“Is there any concern that may be trying to reach this deadline and get everybody out, mistakes are being made now that there is a report that at least one of the Afghans evacuated to Qatar has suspected ISIS ties?” Fox News reporter Peter Doocy asked.

“So, no, I would not say that is anything but a success,” Psaki said about Biden’s withdrawal that has left thousands of Americans still stranded in Afghanistan.

Reports from U.S. officials say that at least one Afghan who was evacuated could have ties to ISIS, and up to 100 are on intelligence agency watch lists.

Defense One reported, “Security screeners at Al Udeid Air Base in Qatar have detected that at least one of the Afghans who was evacuated from Kabul Airport has potential ties to ISIS, a U.S. official confirmed to Defense One.”

“Moreover, the Defense Department’s Automated Biometric Identification System has flagged up to 100 of the 7,000 Afghans evacuated as prospective recipients of Special Immigration Visas as potential matches to intelligence agency watch lists, a second official said,” Defense One continued.

A senior Biden administration official said on Tuesday that the evacuees will go under robust security screenings before being allowed into the United States.

“That process involves biometric and biographic security screenings conducted by our intelligence, law enforcement and counterterrorism professionals who are working quite literally around the clock to vet all these Afghans before they’re allowed into the United States,” the senior administration official said.

In this article:Afghanistan, Jen Psaki