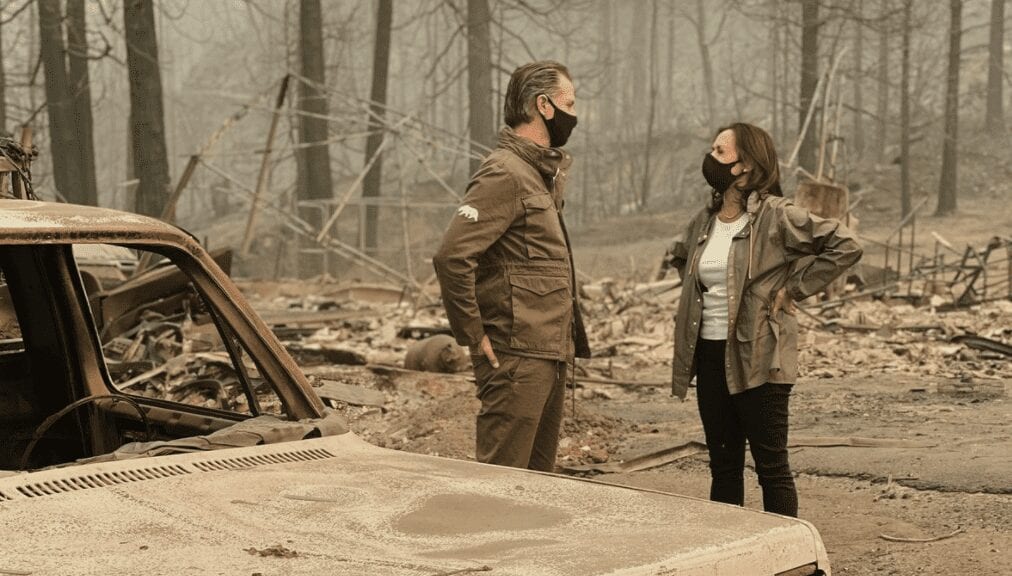 California Governor Gavin Newsom and Democrat vice presidential candidate Kamara Harris have deeply upset California residents, who believe their tragedy was used for a simple “photo-op.” Newsom and Harris walked around a burned down property and took photos, which they then posted on their social media pages. “Climate change is real,” wrote Gavin Newsom as the caption for one of the photos he tweeted from his personal account.

Kamala Harris also released photos, writing, “Spent time surveying a burn site with @GavinNewsom in an area that has been devastated by the recent wildfires in California. I’m incredibly grateful for the courage of our brave firefighters and those who have come near and far to help those fleeing the destruction.”

The photos took place in Fresno County earlier this week. After stopping at an Elementary school, Newsom and Harris walked across the street and surveyed the burned down home where they took the photo-ops to stunt for climate change. Trampas Patten recognized the photos as the remains of his parents’ home.

Furious, Patten took to Facebook to express his discontent that the two had allegedly trespassed, and was hurt by the two Democrats for using his parents “for a photo opportunity.” He wrote, “For the friends of mine that don’t recognize the fireplace in the background, that is what is left of my parent’s house! What has me really frustrated right now is the fact that these two politicians used my parent’s loss for a photo opportunity to push their political agenda! Political party wouldn’t have made a difference in this moment.”

Reportedly, the area was still under an evacuation order, and Patten said his own parents “haven’t even been let back in yet themselves to sort through what is left of their lives, but these two felt the need to go traipsing around my parent’s property without permission.”

Patten also wrote, “Decent human beings that have character and class, wouldn’t air someone else’s misfortune on national television! Think about this when you go to the polls in a few weeks to vote. Look at this picture closely, imagine it is what is left of your hard work, hopes, dreams, place of sanctuary. Do you want this kind of leadership, using you and your loss for political gain?”